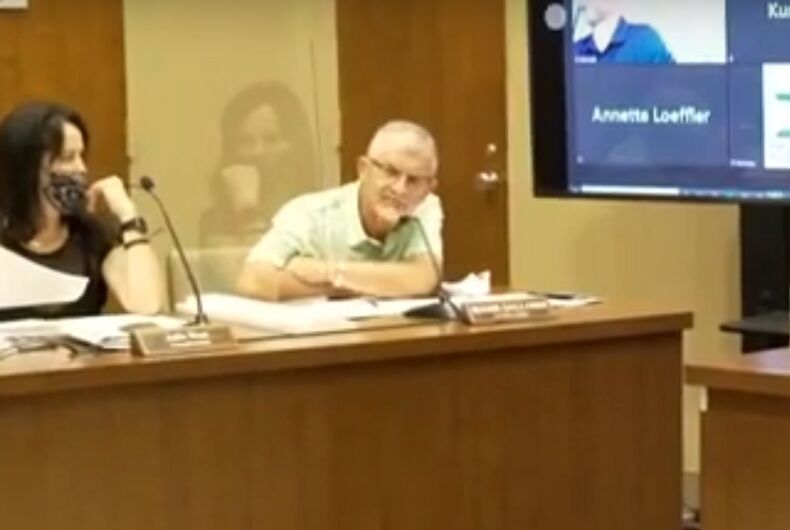 A Republican politician is apologizing after he said “gay people” are “against the Bible” in the middle of a city council meeting.

Out in La Porte – an LGBTQ group in La Porte, Indiana – was speaking about the city’s human rights ordinance at a city council meeting Monday night.

Councilman Roger Galloway (R) decided he had a comment about the request: “You talk- LGB- You’re talking gay people, stuff like that, right? Do you know that is against the Bible? Anybody ever read the Bible?”

Alexandria Masepohl, who was representing the LGBTQ organization, said, “I actually have, yes.”

While Galloway brought up the Bible, he apparently wasn’t in the mood to actually discuss any passages in it: “Eh, well, that’s my comment.”

In a different part of the meeting, Galloway said that he doesn’t “understand Black Lives Matter.”

“You have Black Lives Matters. How about the Hispanics, the Asians, the white people? We’re all here,” he said, implying that valuing Black people’s lives is a zero-sum game that inherently devalues other people’s lives.

“The things said at last night’s City Council meeting are unacceptable,” La Porte Mayor Tom Dermody (R) said in a statement. “These comments are not reflective of the goals we have for the future of LaPorte, nor are they representative of our city government team as a whole.”

City Council President Tim Franke (R) said, “I stand with the LGBTQ community, Black Lives Matter movement and all people of our fair city. My goal is to move LaPorte forward and Councilman Galloway’s statements do not assist in the progression of our city.”

By Tuesday, Galloway had apologized.

“La Porte is a welcoming community, and my remarks did not reflect that,” he said. “My personal opinions and beliefs should never get in the way of my ability to represent our community as a whole. The LGBTQ representatives from the meeting have agreed to meet with me in the coming days. I am grateful for their willingness to have a conversation so I can learn more and develop a better understanding.”

On Out in La Porte’s Facebook page, several people are discussing filing an ethics claim against Galloway as a way to document the incident.