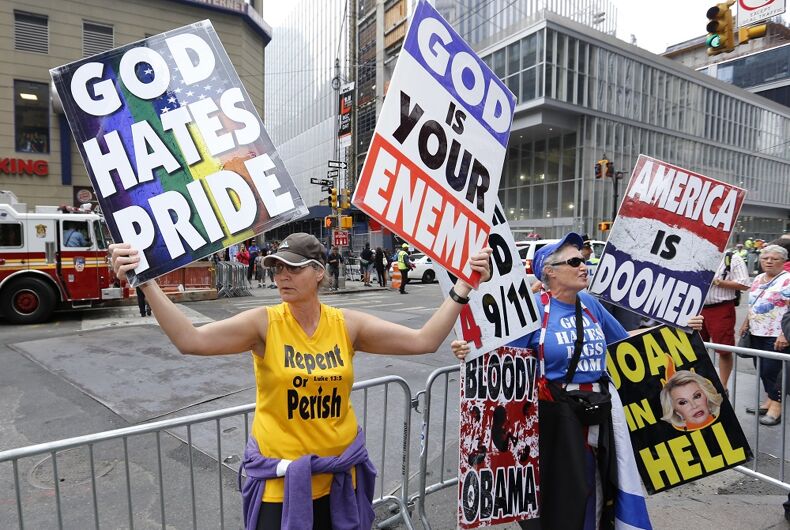 The Westboro Baptist Church at a 2014 protestPhoto: Shutterstock

North Dakota’s Republican Party is facing harsh criticism for its 2020 platform, which accuses LGBTQ people of “recruiting [children] for their lifestyles” and calling transgender women “voyeurs who wish to prey on members of the opposite sex.”

The North Dakota GOP’s delegates voted in favor of a package of 53 resolutions that explain what the party stands on various issues. Resolution 31 reiterates the party’s opposition to civil rights protections for LGBTQ people, and the reasons it lists are too extreme for even some Republicans in the state.

The resolution – which refers to LGBTQ-inclusive civil rights legislation as “SOGI bills,” an expression common on far-right websites – lists reasons why LGBTQ protections would hurt straight and cisgender people.

“SOGI bills grant protection to voyeurs who wish to prey on members of the opposite sex,” the resolution states, a reference to the anti-transgender idea that job, public accommodations, and housing protections for transgender people will allow cisgender men to attack cisgender women in public restrooms.

“SOGI laws empower those practicing LGBT behaviors to assume positions of mentorships of minors often over objections of parents influencing their emotions and there by recruiting for their lifestyles,” the resolution says.

The resolution also claims that “LGBT practices are unhealthy and dangerous, sometimes endangering or shortening life and sometimes infecting society at large,” a reference to HIV, which was once referred to as “gay cancer” and that some Christian conservatives consider a divine punishment for gay people.

The resolution insists that the North Dakota GOP “does not advocate discrimination borne of hatred for one’s fellow man,” even though the resolution says that the “causes of Lesbian Gay Bisexual Transgender (LGBT) compulsions are primarily developmental and not genetic,” a statement often used to support of conversion therapy, a form of torture of LGBTQ people denounced by major medical associations.

“Statements like this by the majority party don’t help when it comes to workforce recruitment or retaining the students we educate for 12 to 16 years,” out House Minority Leader Josh Boschee (D) told In Forum. “We see a lot of people leave the state because of bigotry like that.”

And it’s not just Democrats who are criticizing the resolution – some Republicans are rejecting it.

“The intent of the delegates was to stand up for individual and religious liberties, and, unfortunately, this language falls woefully short of that goal,” North Dakota Republican Party Executive Director Corby Kemmer said in a statement yesterday. “We regret any offense this may have caused, and we will be reconsidering this resolution at a future meeting to bring it more in line with what delegates were attempting to communicate.”

Gov. Doug Burgum (R) distanced himself from the resolution in a statement on Facebook.

“There’s no place for the hurtful and divisive rhetoric in the NDGOP resolutions,” he wrote. “We can respect one another’s freedoms without disrespecting or discriminating against the LGBT members of our state and our party, whom we support.”

As I’ve long said, all North Dakotans deserve to be treated equally and live free of discrimination. There’s no place…

Even though some Republicans in the state oppose the resolution now, many Republicans still support it.

North Dakota Republican Party Chairman Rick Berg said that the resolution is intended to protect “an individual’s religious liberty” and was referring to the state GOP’s belief that religious people have a right to discriminate against LGBTQ people.

Berg also said that he is “definitely not” anti-LGBTQ.

The full text of the resolution is below.

31. In Opposition to Sexual Orientation and Gender Identity Anti-Discrimination Bills

WHEREAS: SOGI bills do not contain provisions whereby individuals who make the claim to be opposite or other than their biological gender shall be prohibited from entering facilities designated for use by members who are biologically the opposite sex; and

WHEREAS: SOGI bills seek to pacify those made uncomfortable as a result of their gender dysphoria by compromising the potential comfort and safety of an untold number of innocent individuals; and

WHEREAS: SOGI bills do not provide means to test the veracity of the claimant who identifies as other than his or her biological gender; and

WHEREAS: SOGI bills open the door for non-gender dysphoric individuals to exploit the opportunity to enter opposite sex facilities for purposes other than those for which they were designed, which may be impossible to detect or identify with any certainty; and

WHEREAS: SOGI bills provide non gender dysphoric individuals with the means to initiate legal action against anyone who may question their motives in entering an opposite-gender facility, effectively rendering such inquiries impractical for fear of retribution’ and

WHEREAS: SOGI bills grant protection to voyeurs who wish to prey on members of the opposite sex; and

WHEREAS: Proponents of SOGI bills ask us to abandon basic biological principle in accepting that sexual orientation is a genetic trait, but gender is not; and

WHEREAS: Proponents of SOGI bills have failed to demonstrate that the issue is even an issue, let alone a pressing issue warranting remediation; and

WHEREAS: Proponents of SOGI bills routinely advance the false narrative that they “just want the same rights and protections [you] already have”. Every right and protection enshrined in statute applies to every North Dakotan equally. There is no legal remedy against suffering discrimination as a result of the heterosexuality of any given subject; and

WHEREAS: The Republican Party of North Dakota does not advocate discrimination borne of hatred for one’s fellow man; and

WHEREAS: Right of conscience is paramount and should not be infringed to pacify a vocal minority; and

WHEREAS: The Republican Party of North Dakota recognizes that arbitrary discrimination is best sorted out in the free market which is invariably unforgiving in instances of unwarranted discrimination; and

WHEREAS: research has shown that causes of Lesbian Gay Bisexual Transgender (LGBT) compulsions are primarily developmental and not genetic as in color and gender; and

WHEREAS: SOGI laws empower those practicing LGBT behaviors to assume positions of mentorships of minors often over objections of parents influencing their emotions and there by recruiting for their lifestyles; and

WHEREAS: SOGI laws are routinely used to attack the religious freedom, free speech and livelihood of others, forcing them to serve their events and beliefs in commerce, employment and education; and

WHEREAS: SOGI bills in some cases criminalize not using certain preferred pronouns; and

WHEREAS: Many LGBT practices are unhealthy and dangerous, sometimes endangering or shortening life and sometimes infecting society at large; now

THEREFORE, BE IT RESOLVED: The Republican Party of North Dakota opposes the passage of legislation which adds sexual orientation and gender identity to our Century code as protected classes.