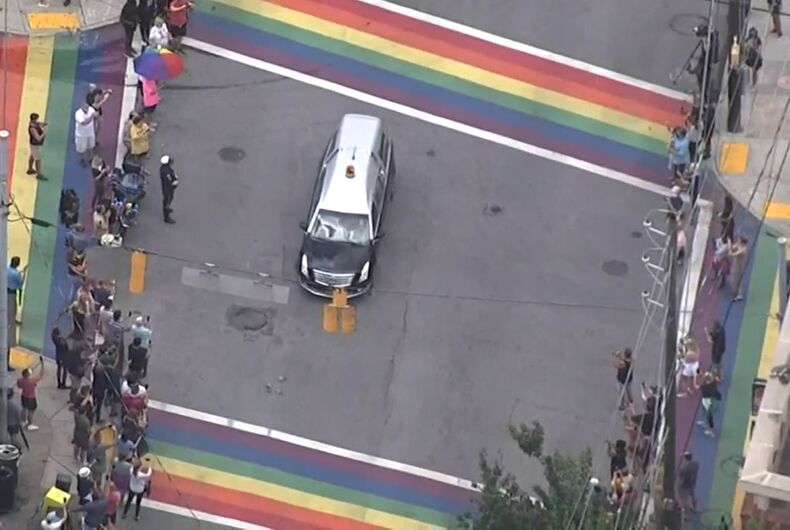 The motorcade made its way from Dobbins Air Force Base in Atlanta to the Georgia State Capitol on Wednesday. The motorcade stopped at the rainbow crosswalks at 10th Street and Piedmont Avenue to pay tribute.

A crowd had gathered at that intersection to applaud and honor the stalwart – and early – supporter of LGBTQ rights.

The motorcade approaches the crosswalk at around the 12-minute mark in the video before.

In 1996, over a decade before LGBTQ rights would get support from mainstream Democrats, Rep. Lewis gave an impassioned speech on the House floor opposing the Defense of Marriage Act (DOMA), which banned the federal government from recognizing marriage equality.

“This is a mean bill,” he said. “It is cruel. This bill seeks to divide our nation, turn Americans against Americans, to seed fear, hatred, and intolerance.”

The bill “denies gay men and women the right to liberty and the pursuit of happiness. Marriage is a basic human right. You cannot tell people they cannot fall in love.”

In 2003, Lewis wrote an opinion piece for the Boston Globe supporting LGBTQ rights, almost a decade before the president would do the same.

“I’ve heard the reasons for opposing civil marriage for same-sex couples. Cut through the distractions, and they stink of the same fear, hatred, and intolerance I have known in racism and in bigotry.”

In the 1960s, Lewis was the chairman of the Student Nonviolent Coordinating Committee, a civil rights organization, and was one of the key organizers of the 1963 March on Washington. He addressed the same crowd to which Dr. Martin Luther King Jr. delivered his “I Have a Dream” speech.

In 1965, he co-led 600 protestors during the Selma to Montgomery marches across the Edmund Pettus Bridge in Alabama. The protestors faced Alabama State Troopers on the other side of the bridge and were tear-gassed and beaten in what would become known as “Bloody Sunday.” Lewis’s skull was fractured by police that day.

Donald Trump may get voted out in a few months, but his toxicity will remain