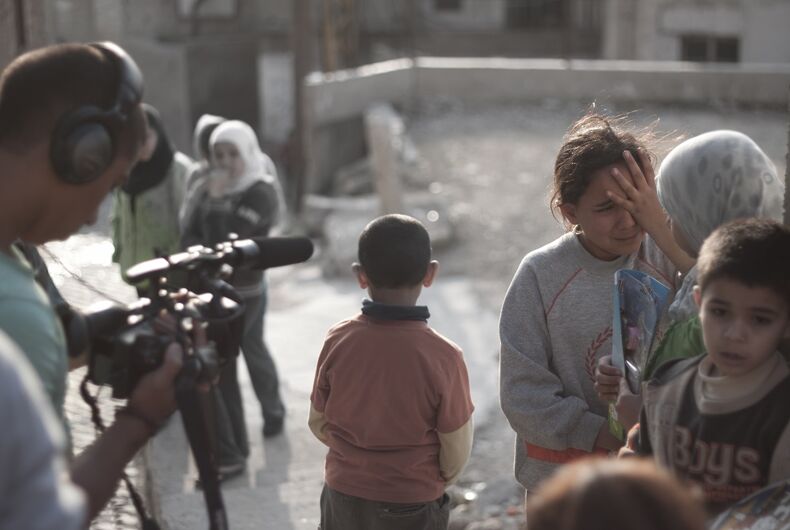 Syrian refugees in 2012 at the Mar Elias camp in Beirut.Photo: Shutterstock

A shocking new report from Human Rights Watch describes sexual violence against gay and bi men and transgender women in Syria since the Syrian civil war started in 2011.

The report says that “gay and bisexual men and transgender women are subject to increased and intensified violence based on actual or perceived sexual orientation or gender identity” and that the violence included “rape, sexual harassment, genital violence (beating, electric shock and burning of genitals).”

The report – which was based on interview with GBT Syrians who had escaped to Lebanon or Europe, as well as with humanitarian organizations working in Lebanon – said that GBT people are “especially vulnerable to sexual violence during conflict” between multiple factions, including the government, militias, and ISIS.

The people HRW interviewed said that they were targeted because of their perceived “softness,” meaning that stereotypically gay and feminine mannerisms would get them stopped at checkpoints and subject to abuse.

“At checkpoints, they generally stop people who are dressed differently or people who take care of their appearances… people dress in Syria, somehow in a conservative way. So, wearing tight pants, wearing lots of perfume or fixing the hair — these are practices only for gay and trans people,” said “Walid,” a 26-year-old gay man, adding that police “also look at gestures. The way we sit and move our hands, body language. They target gay and trans people.”

The interviewees said that sexual violence was common against straight and cisgender men and boys in prisons and detention centers, but GBT people were singled out. Sometimes guards would go through their phones for evidence that they’re gay.

“Yousef,” a 28-year-old gay man who was arrested in 2012 for protesting the government, said that he was beaten when he got to prison, but it got worse when guards looked on his phone and found out he is gay.

“They said to us that they checked our phones and told us, ‘You are not only against what is right; but you are also fa***ts,’” he recounted. “All the aggression was multiplied by 10, I would say.”

“They were happily doing it. They were of course raping us with sticks. They rape you just to see you suffering, shouting. To see you are humiliated. This is what they like to see.”

“They had a stick inside my anus, and they started saying, ‘This is what you like, don’t you like it?’ It went up until my stomach.”

One survivor said that his boyfriend was killed by ISIS during the conflict.

“I was detained by ISIS for three months for being part of protests,” said “Khalil,” a now 21-year-old gay man. “I was 15. I was detained with my friends. My boyfriend was thrown from a high building by ISIS.”

Sexual violence is also common in the military.

“Toufiq,” a 25-year-old non-binary person who was assigned male at birth, said that their family found out they were in a relationship with a man and forced them to join the military in 2017.

“I was harassed by the soldiers I stayed with,” they said. “I did not have a beard at the time so they thought I was soft.”

“They did everything without my consent… intercourse… sexual relations.”

They fled the military after one month of service.

The HRW report says that genital beatings are another common form of sexual violence in Syria.

“They beat me on my private parts,” said “Nur,” a 25-year-old queer person who uses “she” pronouns. She was taken to a checkpoint when she was late for military service in 2012.

“First because I didn’t hand myself to the army…. When they learned I was part of the LGBT community, they started beating me double. Whoever went in or went out [of the checkpoint facility] beat me.”

Sometimes the violence came from their own families.

“My brothers recently found out that I am gay and they torture me about it,” said “Jamal,” a 23-year-old gay man. “They beat me, imprisoned me at home, and they have threatened to kill me. They follow me like my shadow.”

“Fahed,” a 23-year-old gay man, said that his mother found out he was gay and she texted him, calling him a slur. “I will kill you myself,” she wrote, if he didn’t leave Syria.

Fahed said that his stepfather gave his name to a pro-government militia in Syria to try to get him killed. He escaped to Lebanon two weeks later.

Sexual violence in Syria is probably underreported, according to HRW, both because of shame associated with being a victim of sexual violence and that nonprofits and medical facilities can be openly hostile to male and GBT victims. Some of the survivors told HRW that they didn’t seek any medical attention because they “did not trust the healthcare system.”

Yousef, the gay man who was beaten and raped in prison, said that he was turned away from multiple hospitals for medical attention.

“They considered me as an enemy,” he said. “They thought I was from the opposition.”

Nonprofit organizations that work on sexual violence among Syrian refugees in Lebanon told HRW that all shelters and most services they provide are geared toward girls and women.

One organization that runs a center for male survivors of sexual violence said that staff received no training.

“There are people among the staff at humanitarian service providers who think that sexual violence against men and boys does not exist or men can only be perpetrators,” said a social worker.

Victims said that humanitarian organizations often laughed at them or blamed them for being raped. Others said that they were mocked for their gender expression.

“Every time I go there, the security lady pokes her friend and says, ‘Look what he is wearing,’” said Rima, a 20-year-old non-binary victim who escaped to Lebanon. “As for males, they say, ‘Oh look what times we live in. Isn’t he embarrassed with himself? Is he a boy or a girl?’”