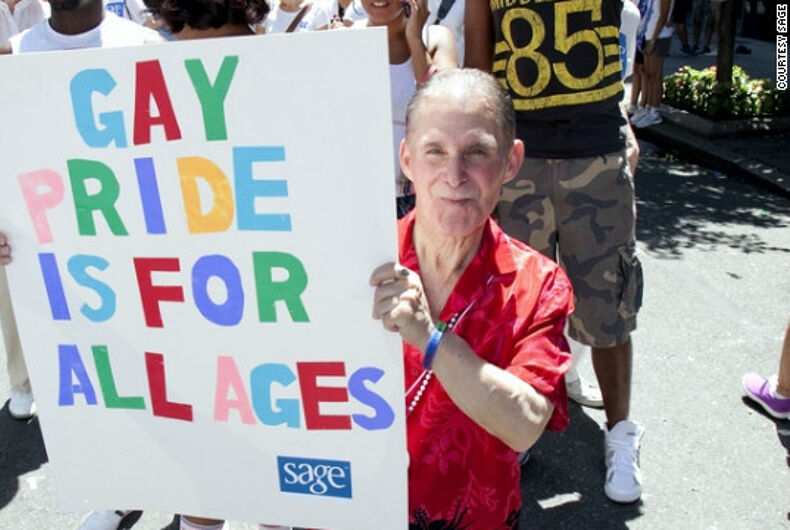 Society’s obsession with youth is hardly a secret. (Just ask any actress over the age of 40.)

But recently released results of a national survey found that the pain that seniors experience from ageism is incredibly broad. For LGBTQ seniors, that effectively doubles the discrimination that they face.

Related: Here’s how you can support the LGBTQ community when it’s needed most

The National Poll on Healthy Aging, conducted by the University of Michigan and sponsored by AARP, asked more than 2,000 adults aged 50 to 80 about their experiences. A shocking 82 percent said that they experienced at least one form of ageism in their day-to-day lives.

The most common form was jokes about aging and older people, along with messages that older adults were unattractive. Nearly half said that they experienced ageism in their interpersonal interactions.

That constant drip of discrimination takes a physical toll. Older adults who reported three or more forms of ageism were less likely to rate their overall physical health as excellent or very good compared to those reporting fewer forms. They were also more likely to have a chronic health condition such as diabetes or heart disease and more likely to report symptoms of depression.

That’s bad news in general, but for LGBTQ seniors, it’s especially bad news. They are more likely to have mental and physical health problems.  That makes them more sensitive to the many forms of ageism, including what may be the most pernicious: internalized ageism.

Like internalized homophobia or transphobia, internalized ageism reinforces stereotypes and erodes self-esteem. Of course, a lifetime of societal discrimination has unfortunately primed many seniors for yet another layer of discrimination.

For gay men, internalized ageism may be an especially difficult burden. A 2015 study of 312 gay men with an average age of 61 found that many felt aging was harder due to the perception that gay men primarily value younger men.

The pain many of these men felt was particularly keen because were survivors of the AIDS pandemic. That disease robbed thousands of their peers of the chance of growing old.

“These men have traversed unparalleled, personally relevant historical changes across their adult lives and have paved the way for younger generations of sexual minorities to live in a time of less institutionalized discrimination,” the study’s authors wrote. “Still, they are subject to feeling socially invisible and depreciated in their later years, especially within the gay male community.”

Changing societal bias is a long process, but that doesn’t mean there are no resources available to help LGBTQ seniors feeling the sting of ageism. Many of them are internal.

The same University of Michigan study that showed how prevalent ageism is also found that a majority of the older adults surveyed had positive attitudes. Nearly nine in ten felt more comfortable with themselves and 80 percent had a strong sense of purpose.

Being connected to others, at any age, is a critical starting point. Social isolation only exacerbates internalized ageism. And LGBTQ seniors can also remind themselves of the tremendous resiliency that has defined their lives, without minimizing the pain that accompanied it. It’s not easy putting aside the stereotypes of aging and the real discrimination that comes with it.

But if any group knows about the benefits of shattering stereotypes, it’s the LGBTQ seniors who paved the way for the sense of equality that so many enjoy today.