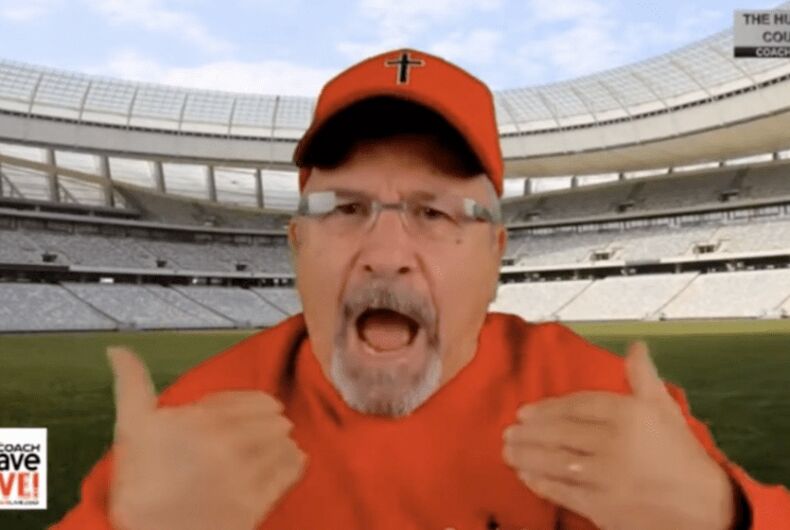 A rightwing pundit said that it’s not “sane” that Chicago Mayor Lori Lightfoot (D) was elected since she’s a lesbian and that there’s “something seriously wrong with her judgment” because she married another woman.

Dave Daubenmire – who was the keynote speaker at a Harrison County, Ohio Republican Party fundraiser last year – attacked Lightfoot on his Pass The Salt Live webcast on Monday.

“I want somebody to tell me how that woman gets elected any place, anywhere,” Daubenmire said, showing a picture of Lightfoot and her wife.

“How could any sane person elect that woman to be head of the city?”

“This is the picture that the city of Chicago wants to send out to the world as the leader, as the top political leader in their city?” he asked. “You tell me that we’re dealing with sane people.”

He then made sure that everyone knew he was talking about the fact that she’s married to a woman.

Daubenmire has a long history of anti-LGBTQ comments.

In 2018, Daubenmire said that lesbians loved women because they’re too “unattractive” to “find a man to love them.”

And earlier this year he promoted the “Fa***ts are Maggots” launched by Mike Heath at Helping Hands Ministries.

Daubenmire has also said that teen girls who aren’t ready to have sex with their boyfriends are committing sexual assault, told Rachel Maddow that she doesn’t “even know that you’re supposed to love a man,” and ranted about chemtrails.

His anti-LGBTQ extremism isn’t limited to his online activities. In 2012, he was fired from a Christian school for being “too divisive.”

In 2014, he did not get a job as a coach at an Ohio public school because of his years of hateful and pro-bullying rhetoric.

He also runs Pass the Salt Ministries which organizes “spiritual boot camps” for men with the slogan “Real Men Under Construction.”