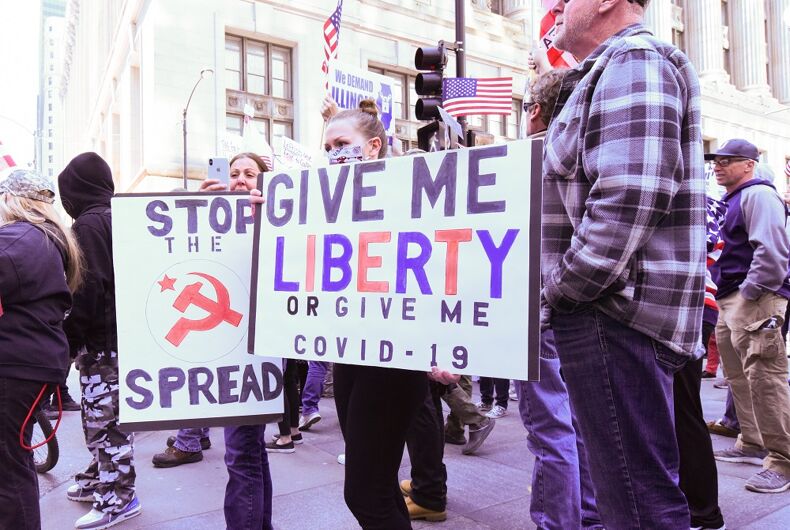 May 1, 2020: Protesters gather in front of the James R. Thompson Center in Chicago to protest the stay at home order.Photo: Shutterstock

Donald J. Trump and his sycophants have made an art of COVID-19 skepticism and denial. They have turned sound medical advice to reduce chances of contacting and spreading the virus into claims of “fake news” and attempts to take away personal freedom of choice.

How can we break the denial systems of people who refuse to perceive the realities of the pandemic and the valid and reliable strategies to restrict its spread? Maybe we can learn from a historical model.

The Allied soldiers who liberated concentration camps throughout Nazi occupied countries were horrified by what they witnessed: piles of naked dead emaciated corpses, stench-filled leaky barracks, corpses riddled with bullets and others plastered across barbed wire electrified fences.

They saw prisoners who were barely holding onto life staring at them hardly able to stand, speak, or respond. All needed urgent medical treatment while most could not hold down food when it was offered. A high percentage succumbed to their medical conditions after liberation.

A few days following Allied entry into Buchenwald concentration near Weimer, Germany in 1945, journalist Edward R. Murrow arrived and reported the conditions to his U.S. radio listeners: “There surged around me an evil-smelling stink, men and boys reached out to touch me. They were in rags and the remnants of uniforms. Death already had marked many of them, but they were smiling with their eyes.”

Murrow was particularly taken by the stark contrasts between what he was witnessing on his side of the fences with the seeming normalcy on the other side among the residents of Weimar.

“I looked out over the mass of men to the green fields beyond,” he said, “where well-fed Germans were ploughing.”

At most of the concentration camps, the horrific treatment Nazi torturers routinely perpetrated upon the prisoners contradicted to how local community residents led their seemingly unaffected lives. They shopped in small privately-owned stores. They traded their ration cards for food and household items, and their lives continued.

It is difficult if not impossible to imagine that these residents did not have any knowledge of the conditions within the camps. They were witness to the seemingly endless line of cattle cars filled with hungry terrified human cargo. They were close enough to hear the screams of horror, and the constant blasts from rifles and machine guns.

In some cases, they could smell the stench of rotting corpses and see the ashes falling like grey snow belching from the crematoria. Though some brave partisans confronted the Nazi onslaught, other remained silent enveloping themselves in a cocoon of shut down human senses and emotions.

To smash that cocoon and show what their complicit silence has allowed, Allied officials forced several thousand residents living near some of these camps to tour the realities behind the electrified barbed wire.

Like the Allies before them, residents too stood horrified. Some fainted from the images around them. Others sobbed hysterically as if their denial systems were as riddled with rifle bullets as the corpses laying before them.

Maybe we should take this model and apply it to the legions of people who remain skeptical and in denial of the realities of the COVID-19 pandemic: those who assert that “it is a hoax,” something contrived by the media to take down their hero Donald  Trump, those who claim that wearing a mask and socially isolating deprives them of their “liberty” and their First Amendment right of “freedom of association.”

We should take a representative sample of these deniers to visit near-filled emergency rooms to see what patients are experiencing: people whose noses and throats are stuffed with plastic tubing, those attached to ventilators, people whose organ systems have shut down, the dead who recently succumb to the virus.

In the clinics, they will see also the looks of stress and grief on the faces of the brave heroic healthcare workers who are functioning in previously unimaginable conditions and are bearing the brunt of essential life saving and life giving duties as the deniers stand among “the green fields beyond ploughing.”

They should then be made to attend memorial services for the victims of this partly preventable pandemic, and witness the effects the loses are having on friends and family.

As with the concentration camp community residents who witnessed the horrors perpetrated by human beings, maybe touring the front lines in the battle against a viral enemy will wake up those currently dormant essential human conditions of compassion and empathy while simultaneously helping people realize that wearing a mask and socially isolating has nothing to do with politics but has all to do with community health.

Mass murders occur on the macro level when people on the individual and collective level let them happen, when witnesses – so-called “bystanders” – do little or nothing to intervene. When people either allow their fear or reluctance to “get involved” to supersede their empathy.

Empathy, that special and majestic human quality, has always been a vital life force of our humanness. As we understand in psychology, unless there is developmental delay, infants demonstrate the rudimentary beginnings of empathy whenever they recognize that another is upset, and they show signs of being upset themselves. Very early in their lives, infants develop the capacity to crawl in the diapers of others even though their own diapers do not need changing.

Though empathy is a part of the human condition, through the process of socialization, others often teach us to inhibit our empathetic natures with messages like “Don’t cry,” “You’re too sensitive,” “Mind your own business,” “It’s not your concern.” We learn the stereotypes of the individuals and groups our society has “minoritized” and “othered.” We learn who to scapegoat for the problems within our neighborhoods, states, nations, world.

How do we reach people in ways that expose and undermine beliefs and fears that  prophylactic measures in the midst of a deadly and continually expanding pandemic trigger political concerns related to issues of freedom, independence, the roles of government, and the rights and responsibilities of individuals living in community?

How do we reach, for example, the two people, a middle-aged man and women who are walking from a recent Trump rally carrying together a large hard-board sign with clearly distinguishable professional lettering declaring, “I WILL NOT TRADE MY ‘FREEDOM’ FOR YOUR SAFETY!”

Clearly, for some people, that precious life-affirming flame of empathy can wither and flicker. For some, it dies entirely. And as the blaze recedes, the bullies, the demagogues, the tyrants take over and fill the void where our humanness once prevailed. And then we have lost something very precious.

How can we reach people whose once brilliant flames of compassion and empathy have been extinguished, drenched like a campfire in a valley hit by a high velocity flash flood, or diminished slowly over time by occasional showers?

How do we reach these people?

What do you get when you cross Donald Trump with Ursula? A poor deplorable troll.