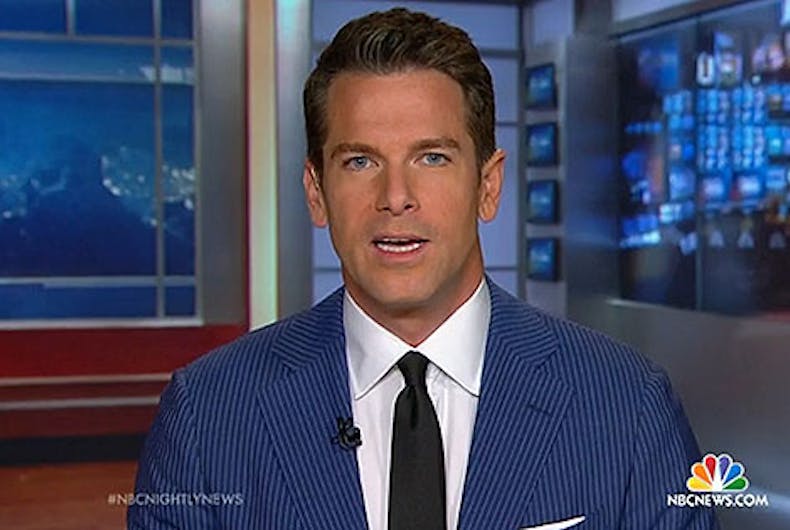 Roberts posted a nearly-four-minute-long video on Facebook this month to announce that he will host a daily program called Thomas Roberts Live At 5 and that his goal is to present positive news about the LGBTQ community, including stories that other platforms might miss or ignore.

Related: Don Lemon on why it’s still important for famous people to publicly come out

Roberts said the show will originate from his home in Atlanta, where he has been sheltering in place since March with his husband Patrick Abner, but that he may eventually take it “on the road.” He said the first program will stream on Monday, June 8, on a newly-created Facebook page, Thomas Roberts Live.

In a posting on Facebook, Roberts said the program will be “dedicated to reporting “Gay Good News in coordination with Gay Pride during the month of June 2020.” He didn’t indicate whether it will run beyond June.

In his accompanying video, Roberts hedged a bit about the show’s frequency, saying at one point that it will be “every day, I think,”  but then following that up with “I want to really be aggressive with this and try it every day at 5 o’clock” for “at least 30 minutes of news.”

Krasinski, an actor and director who co-starred on the NBC version of The Office, started his eight-part free YouTube series from his home office in March as a way to tell positive stories that might help cheer people up during the COVID-19 pandemic.  He asked in his first show why there has never been a program dedicated entirely to presenting good news.

In a posting on Facebook, Roberts acknowledged the precedent set by “John K.”

In his series, Krasinski shared videos about people who survived COVID-I9 and found ways to carry on with life during the pandemic. He hosted a “virtual quarantine prom” and presented feel-good stories about a cancer patient completing her treatments;  online graduations; additional actors from The Office and other topics, with occasional appearances by his wife, actor Emily Blunt.

Some Good News has since been licensed to ViacomCBS, following a “massive bidding war,” and is expected to appear initially on ViacomCBS’s streaming service with a different host but with Krasinski remaining involved, according to The Hollywood Reporter. Roberts’ show takes a similar approach and gives it a gay twist.

“Our world is in need of a morale boost,” Roberts said in a written statement that he posted online about his program, dubbed GGN for Gay Good News.

“I wanted to do something to boost morale in the LGBTQ community with gay good news. Using Facebook as a platform was a no-brainer because it’s free and so user-friendly. I have been shelter-in-place with my husband Patrick since March. Since June is LGBTQ Pride Month I decided to ‘come out’ if you will on Facebook!”

He has been in a relationship with Abner since 2000. They announced their engagement in 2011, one day after same-sex marriage in New York was legalized and were married in 2012.

Roberts publicly acknowledged he was gay while speaking at the annual convention of the National Lesbian and Gay Journalists Association in 2006. In 2015, he became the first out gay person to anchor a national evening news broadcast when he substituted for the regular anchor on NBC Nightly News.

After graduating from McDaniel College in Maryland in 1994, Roberts worked at a series of local television stations before joining CNN, where he was a correspondent and news anchor from 2002 to 2007, appearing on CNN Headline News and other programs.

In 2010 Roberts joined MSNBC, where he anchored MSNBC Live with Thomas Roberts, was a correspondent for NBC News and served as a fill-in anchor on The Today Show and NBC Nightly News, among other roles.

He also hosted an early-morning news program on MSNBC called Way Too Early. For Shift, a digital live streaming network affiliated with MSNBC, he hosted Out There with Thomas Roberts, a weekly news and talk show about LGBTQ issues, featuring interviews with LGBTQ role models and straight allies.

In 2013 Roberts co-hosted the Miss Universe pageant from Moscow for NBC and interviewed Donald Trump, who owned the pageant at the time. The pageant occurred the same time Trump was supposedly filmed in a Russian hotel room with prostitutes peeing on a bed as part of a much-discussed but never verified video dubbed the “pee tape.”

According to records kept by former FBI Director James Comey, Trump claimed that he didn’t stay overnight in a Moscow hotel on that trip and so could never have been part of a pee tape. But Roberts contradicted Trump, stating on the record that he was in Moscow for one full night and at least part of another, because he saw Trump over the course of two days to broadcast the pageant and conduct a sit-down interview.

The purported tape, if one exists, has never been shown in public.

In 2017, Roberts left MSNBC and NBC. The following year he became an evening anchor on WGCL-46, the CBS affiliate in Atlanta. He left that position amicably 14 months later, saying it wasn’t “the right fit,” but remained in Atlanta.

During the video posted on Facebook to give a taste of what his new show will be like, Roberts played with different screen filters he might use and discussed his search for an appropriate backdrop. He didn’t say whether Abner might drop in the way Blunt did for Krasinski.

“I thought about doing it from outside, and I was running around trying to fix this whole place up,” he confided. “Then I thought I’m just going to hold it like a selfie and talk to you and make it as simple as possible and pure as possible. “

Dressed in a dark shirt with no tie, Roberts said in the video that the show is intended both for viewers who are staying home and those who are working or getting back to work outside the home.

He said he wants to cover stories that might otherwise not be told because many Pride events have been canceled due to the pandemic and those events have typically served as pegs for news about the LGBTQ community.

“I know a lot of us have felt bad because here we are, getting out of isolation and so many June Pride events have been canceled not just here at home but around the world,” he continued.

“That’s pretty sad for a lot of people, and it’s also sad for our community in general because this is our time to shine. This is the time when we change hearts and minds about what people think about the LGBTQ community and the media is just not going to be covering it because there’s not going to be the events necessary to cover.”

Roberts asked viewers to send him information about weddings, anniversaries, and good deeds worthy of notice.

“We are going to interview some great people. We are going to tell you great stories about your own friends and neighbors. And hopefully, it’s going to be something that inspires you and cheers you up, but again it’s because this is the month of June and this is our time to shine.”