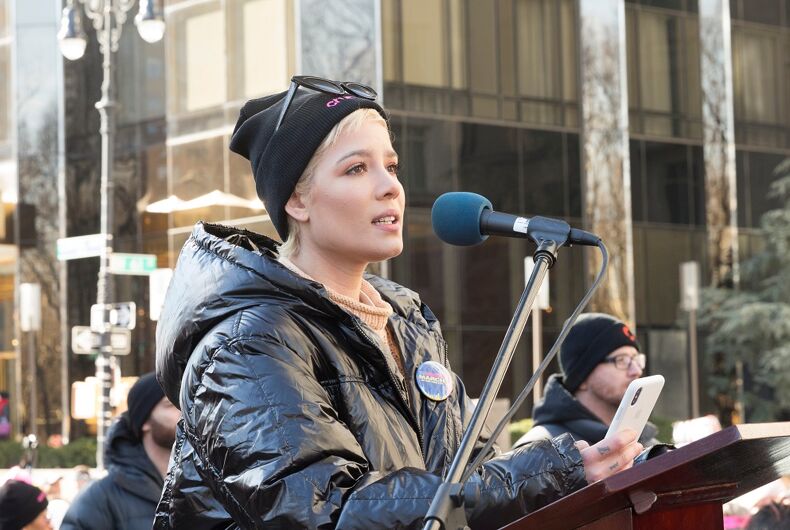 Out pop singer Halsey says she was hit by a rubber bullet while protesting the death of George Floyd, a black man who died after a white police officer kneeled on his neck for at least nine minutes while he said he couldn’t breathe.

Halsey attended a Black Lives Matter protest in Los Angeles on Saturday and documented alleged police brutality in a series of tweets.

Police “fired rubber bullets at us,” she wrote. “We did not breach the line. Hand were up. Unmoving. And they gassed and fired.”

fired rubber bullets at us. we did not breach the line. hands were up. unmoving. and they gassed and fired. pic.twitter.com/K8YauF0APn

In a video, she says that she and other protestors are “doing nothing” while police advance against them. Then she gets hit by an object and the video ends.

WHO ARE YOU PROTECTING? pic.twitter.com/o9LtDZRknG

In video she posted to Twitter, police who were standing far away fire what appears to be tear gas at the crowd.

“WHO ARE YOU PROTECTING??” Halsey asked.

WHO ARE YOU PROTECTING?? pic.twitter.com/Pc306OCiKO

In another tweet, she said that she wasn’t arrested and encouraged her fans to donate to bail funds.

I WAS NOT ARRESTED.

Im safe. There were ppl I had to get to safety as many of them have VISAs. Myself + many of my peers were shot, gassed + antagonized. The frontline was calm + did not provoke

BUT MANY ARE NOT SAFE + MANY ARE IN CUSTODY

DONATE TO BAIL ORGS!!!
I AM CURRENTLY

“This hit me through layers of fabric and for that, I am extremely privileged,” she wrote. “They were fired at people’s faces during peaceful moments of the demonstration.”

“Man f**k every single person with a platform who is choosing to be silent,” she wrote. “You have a platform. You have seen that a man was murdered. You don’t care.”

She accused celebrities who aren’t speaking out of wanting “to keep pocketing the money of racists.”

There are no “contracts” keeping celebs on American soil from speaking up about this. They are just choosing not to because a brand is more important and they want to keep pocketing the money of racists. Fuck all of em. Idc.

Same-sex marriages have contributed $3.8 billion to the US economy

The number of LGBTQ seniors will double in ten years. Here’s what you need to know.