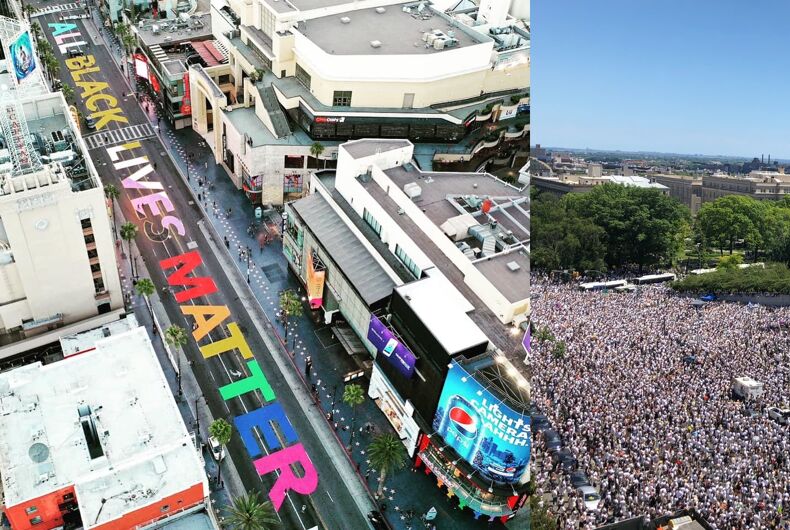 Tens of thousands marched nationwide to protest that racial injustice in solidarity with Black transgender people. Last weekend would normally have been a busy Pride weekend and LGBTQ people and allies showed up in force.

The marches came shortly after the Trump administration announced it would ax non-discrimination protections in the Affordable Care Act that protected transgender people. The announcement came on the fourth anniversary of the mass shooting at Pulse nightclub that left dozens of LGBTQ people dead.

Protestors took to the streets in Brooklyn, Los Angeles, Boston, Salt Lake City, El Paso, Chicago, and Washington D.C. over the weekend to demand racial justice and an end to the killings.

While violence against trans people is common, Black transgender women bear the brunt of it. They make up 91 percent of black transgender people killed in the United States according to the Human Rights Campaign (HRC).

Two women were killed in the past week, Dominique Rem’mie Fells of Pennsylvania and Riah Milton of Ohio, and Tony McCade, a Black transgender man, was shot and killed by a white police officer earlier this month. Police misgendered all three victims.

In New York, thousands gathered outside the Brooklyn Museum wearing white while in West Hollywood, they painted “All Black Lives Matter” in colors matching the trans, bisexual, and rainbow flags.

Thousands also marched in Boston, chanting demands to defund the police and stop the violence.

“It’s a disgrace. We have a long way to go. We need to be treated as humans,” Chastity Bowick, executive director of the Transgender Emergency Fund of Massachusetts, told Boston’s NBC10. “My own history with the police is not great. Seven years ago when the trans emergency fund tried to save my life after leaving an abusive relationship — tried to call the police — they said this is not domestic violence. This is two men having a disagreement. I am not a man. I am a woman.”

Chicago’s “Drag March for Change” also brought thousands to the street to demand racial justice and the defunding of police. The event was organized by Black LGBTQ people who asserted that drag rebels against gender rules, making it a form of civil disobedience.

“I’ve been attending a lot of Black Lives Matter protests that we’ve been having. A lot of times when we say Black Lives Matter, we forget that that includes black trans lives, black queer lives, gay, bi whatever they identify as you know,” Joshua Yrrobali, one of the El Paso protest organizers told NBC 9.

Incredible sight to see in Hollywood.Earlier this month, the city where I was born – Washington D.C.- had “Black Lives…

"Drag March For Change" in support of Black Lives Matter

Thousands of #transgender rights protestors just marched past @MBTATransitPD officers in #Roxbury and shouted, “No justice, no peace!Abolish the police!” #NBC10Boston #NECN pic.twitter.com/fTMhLx7LI2