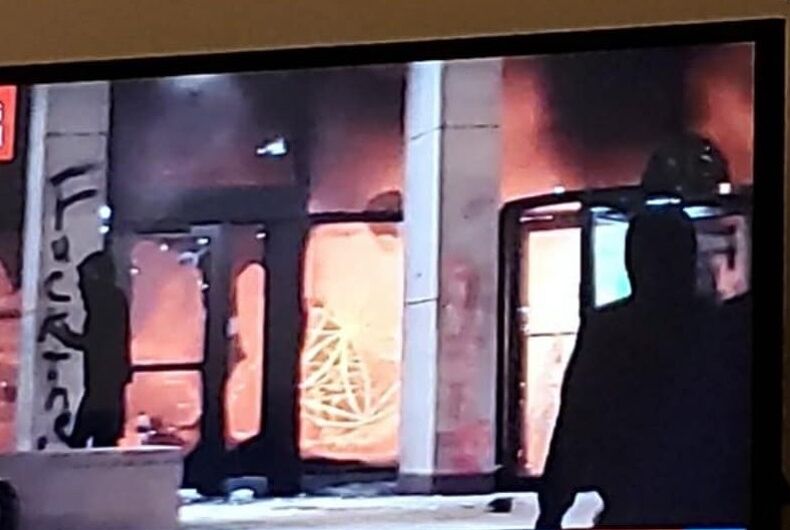 The headquarters of the AFL-CIO in Washington, DC was set on firePhoto: Screenshot

The office building of an LGBTQ group that advocates for queer workers was set on fire during riots in Washington, D.C. on Sunday night. No one was injured and the damage to the building does not appear related to the organization’s affiliation to the LGBTQ community.

Protestors nationwide have taken to the streets after the latest death of an unarmed black man named George Floyd by a white police officer. Police forces have further inflamed tensions by attacking peaceful protestors with tear gas and rubber bullets.

The LGBTQ workers’ organization Pride At Work has offices located in the headquarters building of the AFL-CIO, the largest federation of labor unions in the U.S. The building is two blocks from the White House.

Rioters smashed windows, scrawled graffiti, and set fires in the lobby of the building. At press time, it was still unclear how extensive the damage is inside the Pride At Work offices.

“Black lives matter more than any building or its contents,” Pride At Work Executive Director Jerame Davis told LGBTQ Nation. “While we are saddened that a building that symbolizes the fight for working-class values was targeted during the unrest in Washington, D.C. last night, our resolve is unwavering.”

“We will fix the broken glass and sweep away the ashes so we can continue to fight for racial, social, and economic justice.”

“LGBTQ people are found in every community, including Black and Brown communities and when our communities are under attack, like the rest of the labor movement, we stand up and fight back. We know there can be no peace without justice and that our rights weren’t won easily or peacefully.”

Unrest broke out nationwide after video footage of white Minneapolis police officer Derek Chauvin kneeling on Floyd’s neck for nine minutes went viral. Floyd repeatedly told officers that he couldn’t breathe before he died. The officer continued to kneel on Floyd’s neck for three minutes before realizing he was dead.

The officer was arrested and charged with murder only after multiple days of unrest. Three other officers who were involved have been fired but have not been criminally charged. The city’s police chief has publicly said the three are “complicit” and should also bear responsibility.

Floyd’s death is among the most recent police killings of an unarmed Black man. Police brutality nationwide in response to protestors has further outraged Americans already tense after months of lockdowns and stay-at-home orders, the COVID-19 pandemic that killed over 100,000 Americans and disproportionately affected communities of color, and a massive unemployment rate.

White supremacist groups have flocked to the protests to instigate riots by breaking windows, looting, and setting fires to fan racial tensions. President Donald Trump has blamed “far-left” groups like Antifa for the violence despite state and local officials saying the opposite.

Trump has also fanned the flames with tweets using segregationist language and threatening violence against protestors. Protesters have clashed with Secret Service officers and National Guard units outside of the White House multiple times.

Trump was reportedly forced to shelter in an underground bunker multiple times over the weekend as unrest continued to escalate. On Sunday night, all lights at the White House were turned off to make it harder for protestors to see.

“The labor movement is not built in union offices, it is built in every workplace – and on the streets,” Nicola Van Kuilenburg, Membership and Program Coordinator for Pride At Work, told LGBTQ Nation. “Watching the House of Labor burn has only strengthened my commitment to fight for equality and justice for all working people, especially those that are marginalized.”

Our windows may be broken, but our resolve is not. We will rebuild as we continue the fight for racial, social, and…