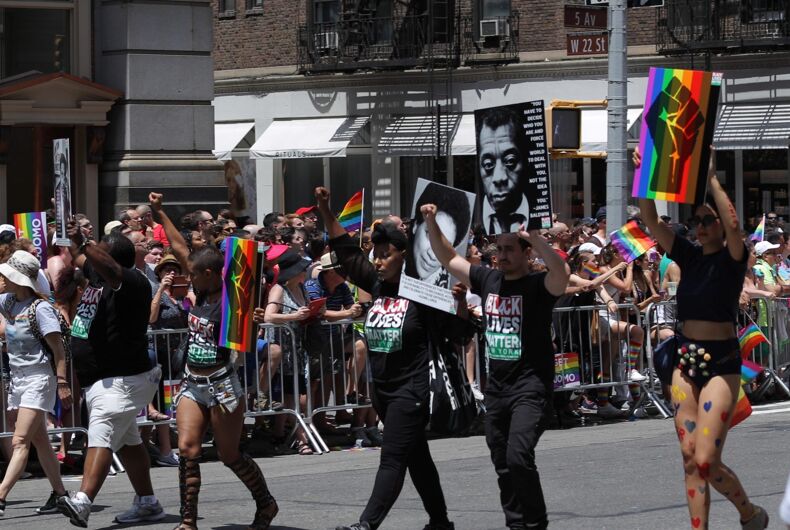 The L.A. Pride March and its key organizing group, Christopher Street West (CSW), will no longer be the head organizer of L.A. Pride’s Black solidarity march after CSW went against the wishes of the local Black Lives Matter chapter and asked police for a special event permit. Now, the All Black Lives Matter march will proceed without any association to L.A. Pride whatsoever.

After initially being postponed and then canceled because of the coronavirus epidemic, L.A. Pride was set to re-emerge on June 14 as L.A. Pride’s Black solidarity march. The solidarity march was meant to further the nationwide protests against police brutality sparked by the murder of 46-year-old Black man George Floyd at the hands of Minneapolis police.

L.A. Pride was the first pride parade to get a permit from the police 50 years ago.

Consoletti noted the history of the group’s relationship with police in his request for a permit, saying they have “demonstrated a strong and unified partnership with law enforcement.”

While it’s required for Pride and other parade events to seek a police permit as part of city code for hosting such events, Black community members and racial justice advocates were outraged that Consoletti was “working with police,” apparently without the input of the local Black Lives Matter chapter.

I've been informed @LAPride is, in fact, working with police for their so-called "Black solidarity" march. Attached is a screenshot of an event producer's letter to the LAPD underscoring "a strong and unified partnership with law enforcement." Homos, this is not it. pic.twitter.com/7YkndfDUrV

While opposition to a requisite police presence may seem odd, Black communities have long suffered generations’ worth of pain and trauma under systemic and institutional racism of police. For some, the very presence of police is threatening and defeats the purpose of having an event opposing the pervasive and corrosive presence of police in Black lives.

Consoletti’s letter received widespread criticism for involving police without having consulted the L.A. chapter of Black Lives Matter. As critics floated plans of organizing an alternative march event to counter L.A. Pride’s police presence, CSW initially said it had “no intention of asking LAPD” to attend. Four days later, CSW announced that it would no longer be involved in organizing the event.

Consoletti wrote that CSW had “assured me they had the support of the Black queer community for their event, but it has become clear that is not entirely the case.”

In a public letter announcing its stepping down, CSW said it had conceived of the solidarity march after speaking with Black LGBTQ+ leaders, but it “had not been able to align directly” with L.A.’s Black Lives Matter chapter before announcing the solidarity event.

We recognize systemic racism, implicit bias and privilege permeates this country, and this includes the history of our organization. We hope to see progress and start with change from within. With that, CSW/LA Pride will no longer be involved in organizing what will now be known as the All Black Lives Matter march on Sunday June 14, 2020, but we are in full support. We will be there and hope the LGBTQ+ community will as well. The CSW Board members who conceived the idea for the march began speaking with Black LGBTQ+ leaders and organizations in advance of the announcement, however they had not been able to align directly with Black Lives Matter leaders prior to the announcement. For that, we apologize to the Black Lives Matter organizers. Conversations did continue and grew to later include leaders from Black Lives Matter LA, and subsequently an Advisory Board of Black LGBTQ+ leaders has formed to lead the upcoming All Black Lives Matter solidarity march. For the All Black Lives Matter solidarity march on Sunday, June 14, 2020: • Permits that were filed during initial planning have been withdrawn and there will be no police or city law officials involved in any capacity. • We recognize the safety concerns around COVID-19 and the pandemic currently plaguing the nation, and disproportionately the Black and LGBTQ+ communities, and ask protesters to take protective measures, including wearing face coverings and avoiding large crowds if you are at high risk or displaying symptoms of COVID-19. California Department of Public Health recommendations can be found at covid19.ca.gov. • This is not a Pride Parade or celebration event. This is a solidarity protest march and there will be no corporate participation. Following the All Black Lives Matter march the CSW Board will continue to work with the new Advisory Board to examine internal policy and further diversify its Board to include more voices and perspectives from the Black LGBTQ+ community. More information about the All Black Lives Matter solidarity march can be found on www.ABLM.LA @ablmla

CSW says it “will continue to work with the new Advisory Board to examine internal policy and further diversify its Board to include more voices and perspectives from the Black LGBTQ+ community,” but it emphasized, “This is not a Pride Parade or celebration event. This is a solidarity protest march and there will be no corporate participation,”

CSW also clarified that “Permits that were filed during initial planning have been withdrawn and there will be no police or city law officials involved in any capacity.”