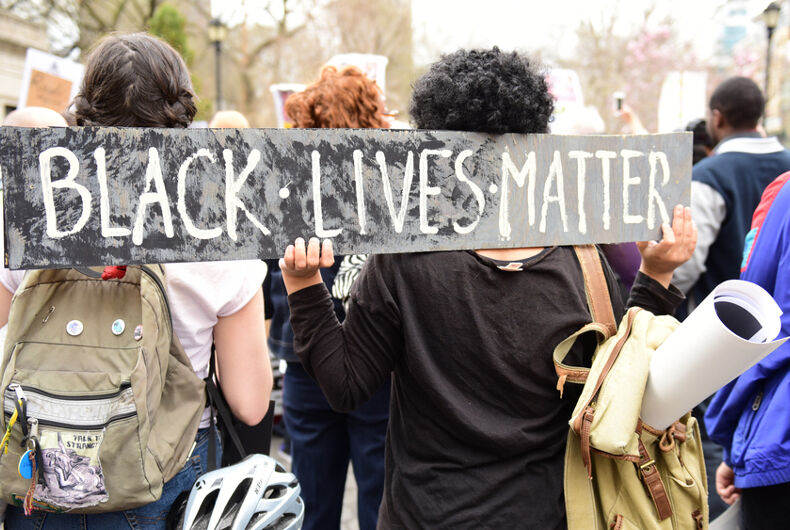 The Black Lives Matter movement is at its most pivotal and important moment since its inception. All over the United States, daily protests are taking place, confronting the authorities and demanding justice for murdered Black people and an end to police brutality.

While activists and organizers are working harder than ever, they are faced with ever-increasing challenges. If you are able, contributing to the following ten nationwide organizations or efforts will help them continue the fight for equality and support peaceful organizing. Every dollar counts.

We have custom selected organizations that are doing amazing work, close to the grassroots of the civil rights and equality movement, but that sometimes are overlooked in favor of bigger, better-known organizations.

The Know Your Rights Camp, the non-profit created and supported by former NFL quarterback Colin Kaepernick, has started a Legal Defense Initiative to “provide legal resources for those in need.” Working with top defense lawyers, the Camp wrote that “when there is an injustice within our community, it is our legal right to address it, by any means necessary.”

Black Youth Project 100, or BYP 100, is a member-based organization of Black youth activists between the ages of 18-35 that are “creating justice and freedom for all Black people.” One of their five core visions includes being “committed to the radical and purposeful inclusion of all Black people” – including Black LGBTQ people.

The National Bail Fund Network along with the Community Justice Exchange put together a directory of verified community bail and bond funds for all 50 states (Washington, D.C. does not have cash bail), in addition to pretrial and immigration assistance funds. These funds help to prevent protesters from being punished by the bail bonds and prison systems and allow them to stay out of jail during the COVID-19 pandemic. Coronavirus is infecting imprisoned populations the most.

The BTFA (Black Trans Femmes in the Arts) Collective, Black Trans Travel Fund, The Okra Project (also included here), and the For the Gworls Party have joined forces to organize an emergency fund for Black Trans-led organizations that need to support their members more than ever.

Support Black Owned is an organization that serves as a directory and guide for supporting Black-owned organizations and businesses. They also have a mobile app and organize cash giveaways.

One of the core values of the Marsha P. Johnson Institute, founded in the memory of the late Black trans organizer, is abolition. The Institute believes that the circumstances that lead to “the senseless killing of trans women and the suicide of trans men” must be bought to an end for the freedom of Black trans people and all oppressed people.

The historic AIDS Coalition To Unleash Power (ACT UP) is still organizing and protesting for the rights of marginalized people and for accountability from the government and corporate America. In a statement reminding people that “Pride is a Riot,” ACT UP NY wrote that “we are here to say that enough is enough. We are tired of seeing members of the Black community senselessly murdered by police.”

This Black-led organization helps to prevent the mass incarceration around the country, where many are punished for their identity. Trans people are frequently placed in cells based on their sex assigned by birth as opposed to their gender identity, leading to an increased chance of rape and violence.

The group notes that sexual minorities are three times more likely to be imprisoned. They have freed people in over 15 states.

This LGBTQ-led organization is dedicated to ending hunger amongst trans people of the African diaspora. They bring home-cooked meals and resources to the community.

Additionally, in honor of George Floyd, you can donate funds via ActBlue that will be divided “between Brooklyn Community Bail Fund, Black Lives Matter Global Network, and 70 other groups” evenly.