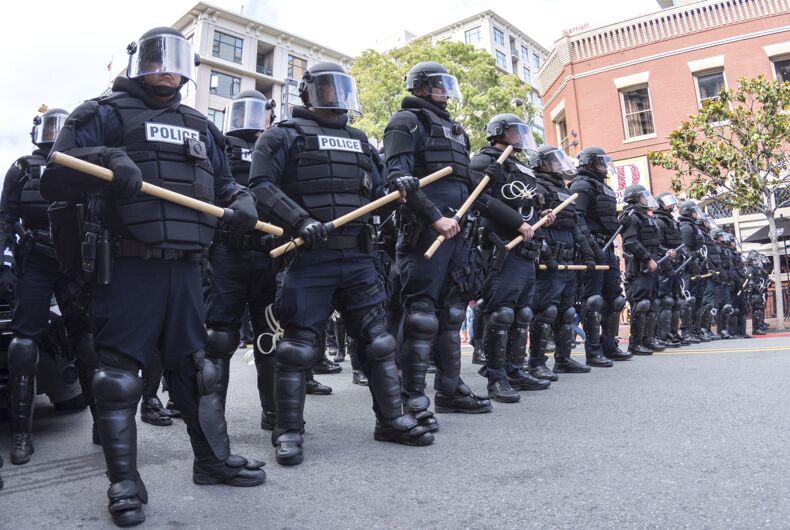 MAY 27, 2016: Riot police in full tactical gear stand ready to confront protesters at a Trump rally at the San Diego Convention CenterPhoto: Shutterstock

Anti-LGBTQ evangelical leader Franklin Graham has come out swinging after President Donald Trump unleashed federal troops on peaceful protestors so he could take photos outside of a church holding a Bible. Ministers were forced off church property so the president could pose the holy book.

Christian leaders from around the globe have condemned the desecration of sacred ground, but Graham is marching in lockstep with Trump and chastising Christians who have spoken out against the violence.

Graham was an early Trump supporter who has regularly touted the president as a role model and made excuses for Trump’s behavior.

“I was asked if I was offended by the president walking out of the White House, which is his back yard, and walking over to St. John’s Church,” Graham wrote in an op-ed for Stream. “Offended? Not at all. This made an important statement that what took place the night before in the burning, looting, and vandalism of the nation’s capital — including this historic house of worship — mattered, and that the lawlessness had to end.”

During the photo op, Trump posed with a Bible his daughter Ivanka carried from the White House in her $1500 designer handbag. Asked if it was his Bible, Trump snarled, “It’s a Bible.”

“And I’m not offended that he held up the Bible — as a matter of fact, I was encouraged! I appreciate it,” Graham continued. “I believe that God’s Word is the only hope for each individual and for our nation. The problem we are facing in this country is a spiritual and moral problem. New laws and more government give-away programs are not the answer.”

No new laws or “give-away programs” have been promoted as part of marches nationwide to protest police brutality.

But Graham’s snide swipe at Christian leaders may be the most hypocritical bomb he’s tossed yet.

“I’m disappointed that some of the president’s harshest critics about going to the church were clergy,” he said. “They have publicly (to the media) criticized the president for walking to the church and for holding up the Bible. That’s unbelievable. They should be thanking him rather than criticizing him!”

“I am the bishop of the Episcopal Diocese of Washington and was not given even a courtesy call, that they would be clearing [the area] with tear gas so they could use one of our churches as a prop,” Right Rev. Mariann Budde said after church personnel were forcibly removed from the site.

“Everything he has said and done is to inflame violence,” Budde said of the president. “We need moral leadership, and he’s done everything to divide us.”

When Trump repeated his stunt the next day, visiting a Catholic shrine to Pope John Paul II, the Archbishop of D.C. also condemned the use of religious iconography for a photo opportunity. As he did at the Episcopalian church, the president posed for photos and promptly left.

“Saint Pope John Paul II was an ardent defender of the rights and dignity of human beings. His legacy bears vivid witness to that truth. He certainly would not condone the use of tear gas and other deterrents to silence, scatter or intimidate them for a photo opportunity in front of a place of worship and peace,” Archbishop Wilton D. Gregory said in a statement released as the president arrived at the site.

“We cannot tolerate or turn a blind eye to racism and exclusion in any form and yet claim to defend the sacredness of every human life,” Pope Francis said in his weekly general audience, adding that he was praying for “the repose of the soul of George Floyd and of all those others who have lost their lives as a result of the sin of racism.”

He called for “national reconciliation and peace” and said the violent provocation by police and federal agents was “self-destructive and self-defeating.”