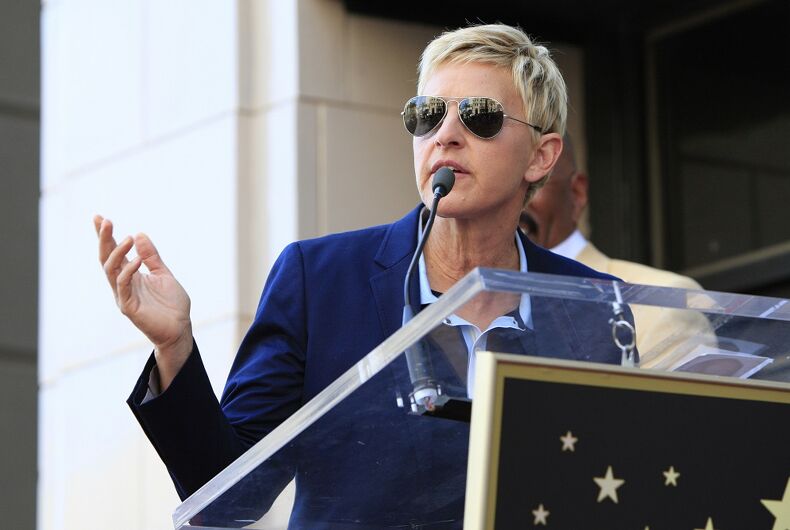 Ellen DeGeneres was criticized by progressives on Twitter for a tweet she wrote in response to the current national protests against institutionalized racism and police brutality. She deleted that tweet, wrote another tweet, and was then criticized by conservatives.

In a tweet from this past Saturday, Ellen wrote, “Like so many of you, I am angry and I am sad. People of color in this country have faced injustice for far too long. For things to change, things must change. We must commit ourselves to this change with conviction and with love.”

Related: Ellen gets emotional about racism, ‘As a white person, I’m ashamed’

The tweet was a reference to on-going protests that followed the death of George Floyd while in police custody. Last week, video of white Minneapolis police officer Derek Chauvin kneeling on the unarmed black man’s neck for eight minutes and 46 seconds went viral. Floyd said that he couldn’t breathe, but Chauvin didn’t move, kneeling on his neck for three minutes after Floyd stopped breathing.

Ellen’s tweet was criticized for not referring to Black people – she only mentioned “people of color” – and for offering only banal sentimentality in the face of massive anger about death and injustice.

Another person on Twitter wrote that she “can’t stop thinking about Ellen tweeting ‘For things to change, things must change’ it’s just so powerful.”

Ellen deleted that tweet – the text was saved by Nico Lang at them – and she wrote another tweet on Monday to replace it that was much more specific.

“I support the protestors who are exercising their rights and standing up against the horrible injustices that Black people in America face everyday,” she wrote.

I support the protestors who are exercising their rights and standing up against the horrible injustices that Black people in America face everyday.#BlackLivesMatter

In another tweet, she wrote that she’s donating money to several organizations that are fighting institutionalized racism and police brutality.

“I hope you will join me if you are able,” she wrote.

I am making a donation to the George Floyd Memorial Fund, the @NAACP_LDF, @BlkLivesMatter, and the @ACLU in support of them, and I hope you will join me if you are able. #BlackLivesMatter

Ellen then got responses from conservatives, who accused her of supporting violence.

One white person on Twitter told her to be more like Martin Luther King, who he believed supported “calm” over racial equality.

yet you remain silent on the violent rioters, looters, and anarchists. Why not also use your strong voice to urge calm like Martin Luther King would?

Another white person told Ellen to donate to educational institutions, as if education protects people’s necks when police decide to handcuff them and kneel on them until they die.

Why, Ellen, would you donate to the ACLU? BLM? A better choice is a scholarship program for community colleges in urban areas that provides for two years of training in med, tech, or industry & not the ACLU!! Put your donation where it will lift people to a better life.

In another tweet, Ellen celebrated Pride Month by recognizing that “the protests that came before me allowed me to be the out, successful person I am. I support the protestors demanding change now.”

It's #PrideMonth. The protests that came before me allowed me to be the out, successful person I am. I support the protestors demanding change now. We can do better, and I'm starting with myself. I’m committed to using my platform to effect change. #BlackLivesMatter

Several conservatives responded to her tweet, accusing her of supporting “Antifa” and wanting to give them “cookies” and a beverage of some sort.

You support my family members getting their business looted and burned? Why am I not surprised? Hey ANTIFA go to Ellen's neighborhood. She will welcome you with tea and cookies.

Give Antifa your address. Let us know how the milk and cookies turn out.

Pride in Pictures: I felt like I was being represented