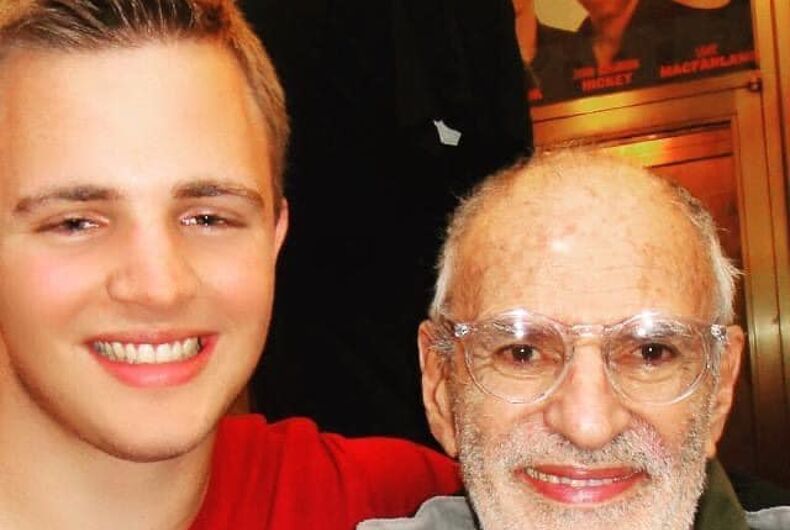 I was sad the other day when I heard the news of Larry Kramer’s passing.

It wasn’t a complete shock; he was 84-years-old and had dealt with health issues for many years prior. But it was just a couple weeks after news that Larry was working on a new play about the connections between the AIDS crisis and COVID-19 pandemic.

It turns out that Larry’s health took a turn for the worse just in the last few days of his life. Up until recently, he was apparently working and doing fairly well.

His passing comes at a time when the lessons he taught us matter perhaps more than at any time since he first broke out on the national scene as a brash, vocal, no nonsense activist warning the gay community about the dangers of HIV/AIDS in the early 1980s. He told us that if we didn’t speak up and stand up loudly and clearly for our health and our rights that the gay men of the world may literally face extinction.

Today we face similar threats, not just from coronavirus but from the Trump administration, which has shown an active hostility and disdain towards our people.

I first became aware of Larry when I read his speech “The Tragedy of Today’s Gays,” which he delivered at Cooper Union Hall in New York City in the aftermath of the 2004 election. He talked about how the apathy and complacency within the gay community had allowed both the re-election of George W. Bush but also the control of Republicans in both houses of Congress.

He said, “With the arrival of this second term of these hateful people… we come even closer to our extinction. We should have seen it coming. We are all smart people. How could we not have been prepared?”

What was his solution to the crisis we faced?

What he said in 2004 sounded almost identical to what he said back in the 1980s. His lessons were incredibly consistent, that we can’t afford to be sit back and be silent, and that we need to support each other and work together instead of tearing each other down as we often do.

He also talked in that speech about how few gays seemed interested or knowledgeable about the history of our movement and gay people. This ties in to a scene from his 1985 play The Normal Heart in which the protagonist, Ned Weeks, delivers the following monologue:

Poor Bruce. Poor frightened Bruce. Once upon a time you wanted to be a soldier. Bruce, did you know that it was an openly gay Englishman who was as responsible as any man for winning the Second World War? His name was Alan Turing and he cracked the German Enigma code so the Allies knew in advance what the Nazis were going to do – and when the war was over he committed suicide, he was so hounded for being gay.

Why don’t they teach this in the schools? If they did, maybe he wouldn’t have committed suicide and maybe you wouldn’t be so terrified of who you are. The only way we’ll have real pride is when we demand recognition of a culture that isn’t just sexual. It’s all there, but we have to claim it, and identify who was in it, and articulate what’s in our minds and hearts and all our creative contributions to this earth.

And until we do that, and until we organize ourselves block by neighborhood by city by state into a united visible community that fights back, we’re doomed. That’s how I want to be defined: as one of the men who fought the war.

Throughout his life Larry would talk about how how we couldn’t just be defined by sexual acts, that our strength as a community came from our shared historical heritage and cultural bonds.

As a teenager I was fascinated by history, in particular that of LGBTQ people, and so this is has always been one of the things I most loved about Larry. When I got to meet him in person after a performance of The Normal Heart on Broadway in 2011, I got to talk to him and thank him for continually standing up for the visibility and preservation of our community. It’s a moment I will never forget.

As he said in his “Tragedy of Today’s Gays” speech in 2004: “I fear for us as a people. Is that crazy? I am always being called crazy by somebody. I love being called crazy. That’s a sign to me that I’m on the right track. Maybe it takes a crazy person to see into the future and see what’s coming.”

Thank you, Larry, for always being crazy, for having the courage to fight, and for inspiring countless young people like me to keep fighting as long as we have to.

We have a long road ahead, let’s use the lessons Larry taught us to fuel our movement forward into the future.

Under Armour is going retro for this year’s Pride collection

Same-sex marriages have contributed $3.8 billion to the US economy