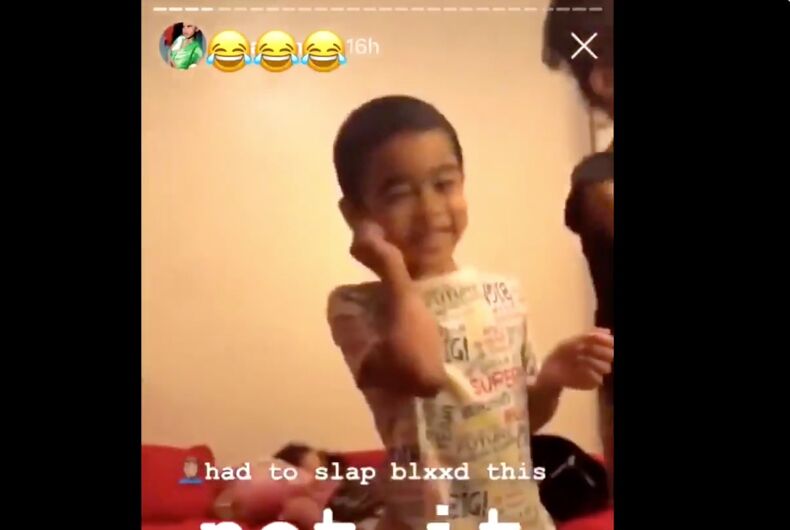 The child was slapped by his babysitter for dancing along to a TikTok video.Photo: Screenshot

In a viral video, a young boy was slapped by his babysitter for dancing along to a TikTok challenge. Video of the incident was posted online and after the child’s family saw it, they quickly sprang into action to defend the boy.

“You don’t do that shit. Fuck wrong whichu? Gay ass bitch,” the woman says after smacking the boy who holds his face as he retreats and immediately stops dancing.

The child was participating in a viral “Savage” dance challenge with his sister. He looks longingly at her as she continues to dance.

Video of the incident was posted on Twitter with the caption “I’m crying.” And when the boy’s godmother saw it, she alerted his mother and responded online.

“My godson comes from a loving home & whether he’s gay or not we love him regardless,” she tweeted as she clarified that the person abusing the boy was not his mother.

“We always let him be himself. His mom thought she could trust this person to watch them for 10mins & this happened,” she said.

She said police had been notified and that the perpetrator will be turning themselves in. The tweets also include a video of the boy and his mother who addresses the controversy and thanks the internet for supporting her child in his time of need.

“Everybody thinks it’s me and everybody was saying all these negative things about me. You know, I’m not worried about none of that. My son is fine, I know he’s good over here. I know he’s being loved right,” his mom says in the video.

She says the babysitter was the boy’s aunt and she “cannot speak for her actions.” She said the incident was “being handled” by the police.

This is my Godson & the person slapping him is not his mom, this person was supposed to be babysitting. Moms wasn't aware of what happened until I showed her this. My godson comes from a loving home & whether he's gay or not we love him regardless. The cops- https://t.co/bfWsPN1tvL

I went to check on him & his mom today & they are doing fine. The person who did this is gonna be turning themselves into police custody tonight

y'all don't know the kinds truma this video just brought back to me 😔😔 and the crazy part is I/him was just having fun being a kid 💔 pic.twitter.com/3xYcPZBjK7

It’s time to end the ban on gay blood donation. People are dying & we can help.