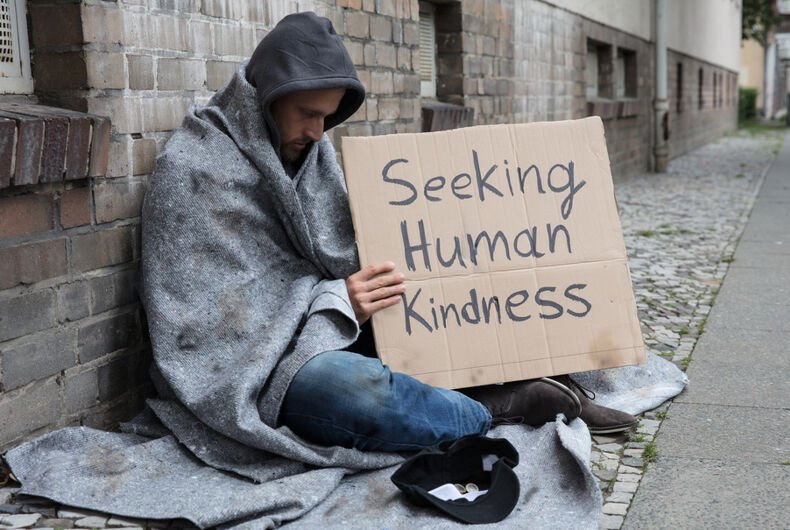 Last summer, Vincent*, a 17-year-old gay teenager in Eugene, Oregon, and his twin brother ran away from their parents’ home to escape the abuse there. They spent the rest of the year sleeping in cardboard boxes, under bridges, and in youth homeless shelters.

When Alexis, a 39-year-old bisexual woman in Dallas, Texas broke up with her controlling boyfriend last spring, she had to sleep in her car and on friends’ couches for several months until she could find a new place to live.

Related: What does “self-isolation” mean for homeless people? This lesbian priest wants to fight for them.

Vincent and Alexis are part of the 17% of LGB adults in the U.S. who have experienced homelessness at some point in their lives, according to a new study by the Williams Institute. What’s more, the study shows that homelessness doesn’t always look like someone sleeping on the street — it can also look like a friend sleeping on a couch, a person sleeping in their car or in a tent, or someone staying in another kind of temporary shelter.

Luckily, the study also makes recommendations about decreasing queer homelessness, but the solutions require federal and state legislatures committed to fixing the issue.

What the numbers tell us about queer homelessness

Past studies have shown that between 20 percent and 45 percent of homeless youth identify as LGBTQ, and queer people aged 18 to 25 are more than twice as likely to be homeless than their straight peers.

But while LGBTQ people are at least 15 percent more likely to be poor than cisgender straight adults, among LGBTQ people, poverty is especially prevalent among racial minorities, bisexuals, women, transgender people, and younger people.

The study shows that people of marginalized races and genders can experience even higher rates of homelessness. While only 15 percent of white LGBTQ people experienced homeless, the rate for Black LGBTQ people is 18 percent. For Latinx LGBTQ people, it’s 23 percent.

Similarly, while 15 percent of cisgender men and women have experienced homelessness at some point in their lives, 17 percent of cis women, 22 percent of genderqueer or nonbinary people, and 28 percent of sexual minorities who are highly gender nonconforming reported experiencing homelessness.

However, the study points out that these differences among races and genders are not statistically significant. They may be specific to this particular study and not necessarily a reflection of what one would see in the general population.

Nevertheless, these numbers have likely worsened during the coronavirus epidemic and will remain consistent without any changes in government policy.

Among the recommendations made by the Williams Institute are increased governmental and private funding to research, develop, and implement quantitative, qualitative, and evidence-based programs for reducing the stigma and discrimination faced by LGBTQ youth and adults. These should also include programs focused on subpopulations (like the trans and Latinx communities) and particular regions and states.

Queers experiencing homelessness also need expanded options for housing, shelter, child welfare, and other relevant services. These places should have mandatory training for their staff to make sure they’re well equipped to respond to LGBTQ people’s lived experiences.

* Full names have been redacted to protect individuals’ privacy.

Editor’s note: A previous version of this article incorrectly stated that one in five LGBTQ people have experienced homelessness in the past 12 months. We regret the error.

America will be a beacon of hope for LGBTQ rights again