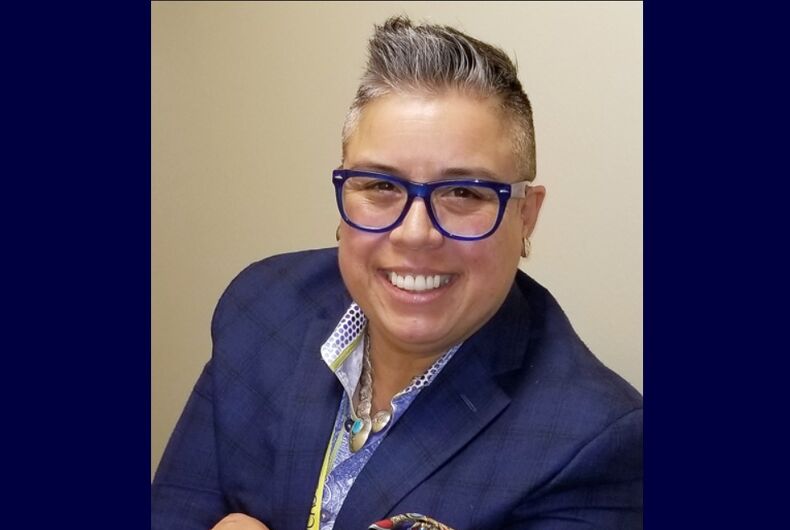 A judge in Texas has been sanctioned by the state for displaying a rainbow flag in her courtroom.

Bexar County Court’s Judge Rosie Speedlin Gonzalez is out and she flies the rainbow flag in her court because it shows that “everyone is welcome into this courtroom.”

She didn’t think that the flag would be a problem because other judges have flags and symbols in their courtrooms. One judge who’s a veteran has a camouflage robe and another flies an Irish flag to take pride in his heritage, she said.

But San Antonio lawyer Flavio Hernandez was “offended” by Speedlin Gonzalez’s rainbow flag and he filed a complaint with the Texas Commission on Judicial Conduct, saying that the flag meant that the judge couldn’t be impartial.

“I think a judge bringing in symbols of sexuality — regardless of what kind of sexuality — I think that has no place in the courtroom,” he told Texas Lawyer.

He said that he would have been just as offended by “a swastika or confederate flag,” effectively comparing being gay to being a white supremacist.

The Commission agreed with him and sanctioned the judge with a private warning. The Commission said that Judge Speedlin Gonzalez violated the rule that requires judges to act in a way that “promotes public confidence in the integrity and impartiality of the judiciary.”

The Commission also took issue with a pen Speedlin Gonzalez uses and a strip of cloth with a colorful Mexican design on it that she wears on her robe, which she said weren’t even Pride symbols.

“The pen and the strip on my robe did not even follow the sequence of the rainbow,” she said. “It was just colorful.”

She said that the Commission “overreached” and she’s planning to appeal the decision, arguing that it violates her freedom of speech.

The judge can’t share the private sanction with journalists because she plans to appeal the decision, and the Commission says its private sanctions are strictly confidential.

Last year, the Commission admonished a judge who refused to perform same-sex marriages even though she performs opposite-sex marriages, arguing that LGBTQ people violate her “sincerely held religious belief as a Christian.”

That judge is appealing the decision as well, and Texas Attorney General Ken Paxton (R) has already said that he will not defend the Commission in that case, saying that “judges retain their right to religious liberty when they take the bench.”

Prides are getting canceled, so now organizers are coming together for an online, global Pride

Trans men who have been on testosterone can still be fertile