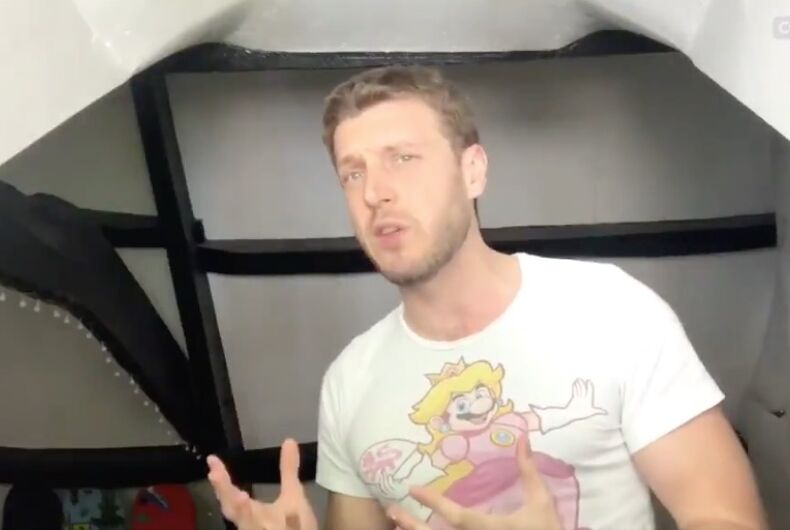 The #MuseumFromHome initiative has staff and curators taking to the web to talk about items in their collection or their areas of expertise – and out exhibit designer Sacha Coward is one of the most popular.

Every day of the lockdown Coward has produced a 60-second video highlighting a different topic, but his quick hit on the symbolism behind the rainbow is a standout.

Related: Creationists aim to ‘take the rainbow back’ by lighting a replica of Noah’s ark

While Christians frequently complain that LGBTQ people “stole” the rainbow from them, Coward breaks down different cultures’ beliefs about the rainbow and what it symbolized to them.

Christians believe God created the first rainbow as a promise never to kill everyone on earth again with a flood. No guarantees were given about plagues.

#MuseumFromHome
Whilst we’re self isolating, some of us museum weirdos have decided to make quick videos about our favourite museum artefacts. So if you can’t go to a museum, let’s bring the museum to you!

Subtle differences:
The LGBTQ+ Pride flags today has 6 ROYGIV stripes OR variations with a black and brown and Trans flag chevron.

The standard rainbow symbol has 7 ROYGBIV stripes (with blue and indigo as separate). pic.twitter.com/ouALt5AblA

Here is Gilbert Baker and his original Pride flag with 8 stripes. This also symbolises hope but has a different history and meaning to those being made during lockdown as it was created for the LGBTQ+ community. pic.twitter.com/tQ2vQGZUJl