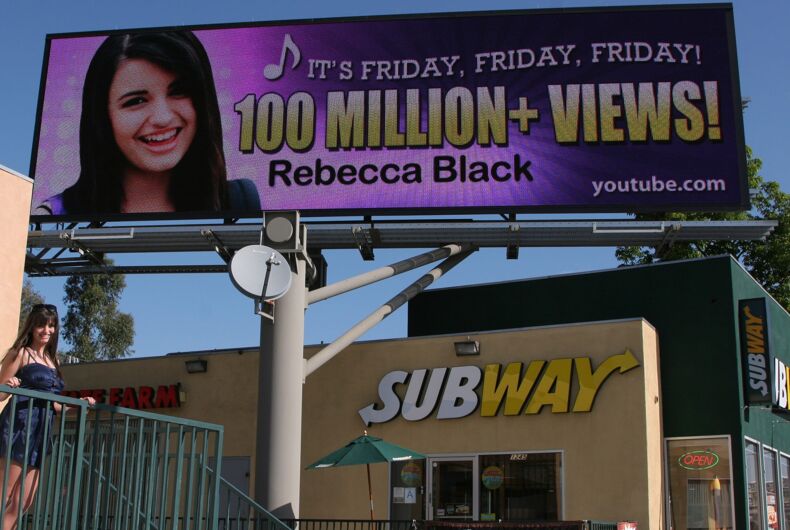 Rebecca Black at the unveiling of an LA billboard celebrating 100 million YouTube views in 2011.Photo: Shutterstock

Rebecca Black – the internet icon whose song “Friday” went viral in 2011 – has come out, explaining that “the word queer feels really nice.”

And the singer said that she broke up with a long-term girlfriend during confinement.

Last week, on the Dating Straight podcast, Black and the hosts were talking about dating during the quarantine, and Black said that she just went through a break-up.

And she referred to her ex with “she.”

The hosts had already agreed with her to talk about her sexuality because of comments she made in a vlog she posted to YouTube in January where she took questions from fans. One of the questions was, “Are you part of the LGBTQ+ community?”

“I definitely see sexuality as being a spectrum,” Black explained. “You can definitely be very on one end of the spectrum or the other. You can be very gay or very straight, which- that is super-cool.”

“But, of course, with there being a spectrum, there’s this huge middle ground that everybody else falls in. And I definitely see myself as being on that spectrum.”

“Definitions,” she concluded, “are so helpful for some people, but so confusing for others.”

She was asked about it on the podcast.

“I made a conscious decision to not, like, ‘come out,’ but just to- people started asking and I stopped not responding,” Black said.

“Every day is different, it’s something that over the past few years I’ve obviously been having a lot of conversations with myself about,” she continued. “To me, the word ‘queer’ feels really nice.”

“I have dated a lot of different types of people, and I just don’t really know what the future holds. Some days, I feel a little more on the ‘gay’ side than others.”

About her recent break-up, Black only said it happened because she “needed alone time. Not just from them, but in general.”

In 2011, when Black was 13, she sang “Friday” and recorded a music video that was posted to YouTube. The song’s producers didn’t think it would be a hit, but it became a viral sensation because of people who hate-watched it to click dislike.

Her parents pulled her out of school because of the online harassment, school bullying, and death threats that followed. While the video was one of the most viewed videos on YouTube at the time with over 160 million views, it was pulled out of fear for her safety.

“Friday” is currently back on YouTube, where it has 1.1 million likes and 3.6 million dislikes. Black recorded several other songs, including one called “Saturday,” but none got quite the reach that “Friday” did.