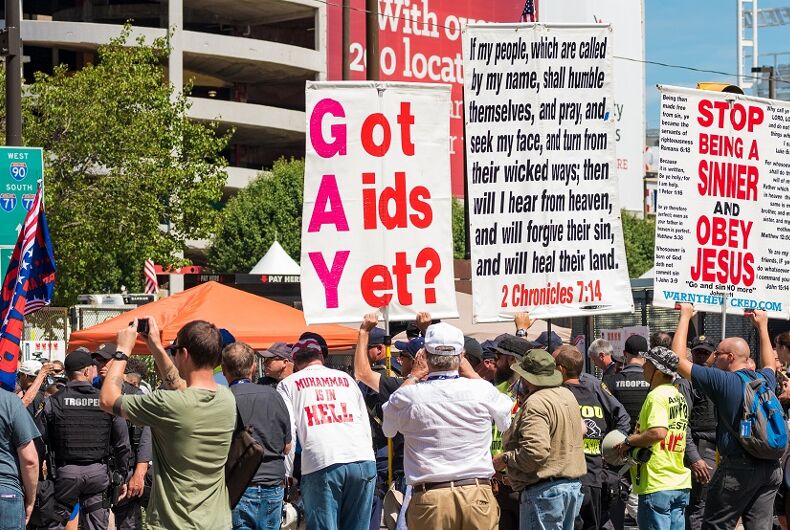 Anti-LGBTQ hate groups are on the rise in the U.S., according to a new report from the Southern Poverty Law Center (SPLC), but the Trump administration is calling it a “far-left smear.”

“According to a report by Lambda Legal, a third of the more than 50 U.S. circuit court judges nominated by Trump have a ‘demonstrated history of anti-LGBTQ bias,'” the SPLC report says. “Lambda argues that the justice system is ‘now indisputably in a state of crisis.'”

The report says that much of the growth in anti-LGBTQ hate groups has taken place “at the grassroots level” and cites Steven Anderson and his Faithful Word Baptist Church as an example. Anderson has been banned from 33 countries due to his hate speech – which includes calling the victims of the Pulse nightclub shooting “disgusting homosexuals… worthy of death” – and his organization was just added to the SPLC’s list of hate groups.

Out White House deputy press secretary Judd Deere – who is on-board when it comes to Trump’s anti-LGBTQ equality agenda – called the report “disgusting.”

“While the radical left has pushed false accusations that LGBTQ Americans are threatened, the president has hired and promoted LGBTQ Americans to the highest levels of government, including positions at the White House, Cabinet agencies, and ambassadorships,” Deere told NBC News.

Deere also cites Trump’s “global campaign to decriminalize homosexuality” – an initiative that the White House announced but took few discernible steps to advance and that has had no successes – and his “bold declaration” to end HIV transmissions in the next 10 years, a promise experts are skeptical Trump’s policies will achieve.

One anti-LGBTQ hate group tracked by the SPLC, the Alliance Defending Freedom, said that it was “appalling” to release the report during the coronavirus pandemic and said that the SPLC should “retract the report.”

“Stop sowing division and join the rest of America against our common foe: COVID-19,” said a spokesperson for ADF, a group that is currently fighting a legal battle to ban transgender girls from competing in school sports.

A group that merely opposes LGBTQ legislation will not appear on the SPLC’s list of hate groups. It has to “attack or malign” LGBTQ people in its actions or official communications, often by associating homosexuality with pedophilia, calling for death to LGBTQ people, and saying that LGBTQ people are a threat to children. Hate speech, the SPLC argues, is often a precursor to violence.

“We are not against Christian groups,” said the SPLC’s Lecia Brooks. “For us, it’s more about the way they go out of their way to demonize LGBTQ folks.”

“Sadly, there is not enough public outcry against anti-LGBTQ groups because we have just let it go saying, ‘That’s just their religion.'”