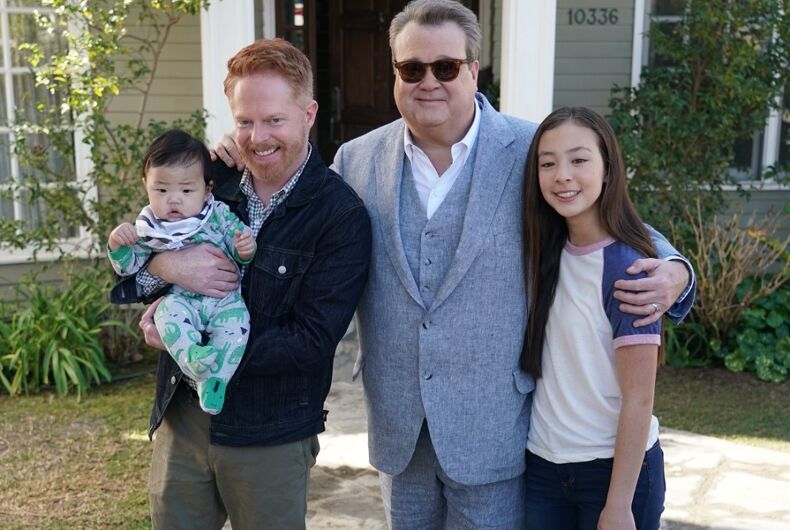 The series finale of Modern Family aired last night on ABC, and there’s already talk of a spinoff that would focus on the show’s gay couple, Mitch and Cam.

After 11 seasons, 22 Emmy Awards, and 12 Golden Globe nominations, the mockumentary-style sitcom has come to an end.

The show followed the lives of several families, including gay dads Mitch and Cam – played by Jesse Tyler Ferguson and Eric Stonestreet, respectively – and their daughter Lily.

When Modern Family first aired in 2009, only a handful of states had legalized marriage equality. In season five, Mitch and Cam got married, and by the end of the series they were leaving for Missouri with their now-teen daughter and a newborn son as Cam got offered a coaching job.

Considering how immensely popular the show has been over the last decade, it’s no wonder the show’s co-creators are already talking about a Mitch and Cam spinoff.

“But they’re literally just thinking about it,” he specified.

Levitan said that the writers, who currently aren’t working on the show, are “using this time” to think about “if there’s something there.”

“Those characters are of course near and dear to me, and I certainly think that they’re strong enough to carry a show,” he said.

Christopher Lloyd, the show’s other co-creator, said that Mitch and Cam aren’t moving to Missouri just so that a spinoff can be made, but….

“Now having said that yes, it does present a possibility for us,” Lloyd said. He said that “we would be probably dumb to not explore it” but that it could be difficult “particularly because Modern Family is a tough act to follow.”

Talking to The Hollywood Reporter, Lloyd said that a spinoff “can’t just be more Modern Family; it’s got to be some of our show but with new characters mixed in, perhaps.”

Lloyd has written for other hit sitcoms: Frasier, Golden Girls, Wings. He was also the executive producer of Frasier for eight seasons, and Frasier was a spinoff of Cheers.

So naturally he referred to that show.

“I spent a lot of years on Frasier, and that was a great version of a spinoff because you took a single character and put him around a bunch of other characters and it became a whole new world and it almost made you forget about the show that he had come from,” Lloyd recalled.

But for a Modern Family spinoff, “we wouldn’t go that far; it wouldn’t be one character, but it might be a couple and we’ll see where that goes.”

The show’s co-creators have been talking about the possibility of a spinoff for years now due to the show’s popularity and fan interest in the characters.