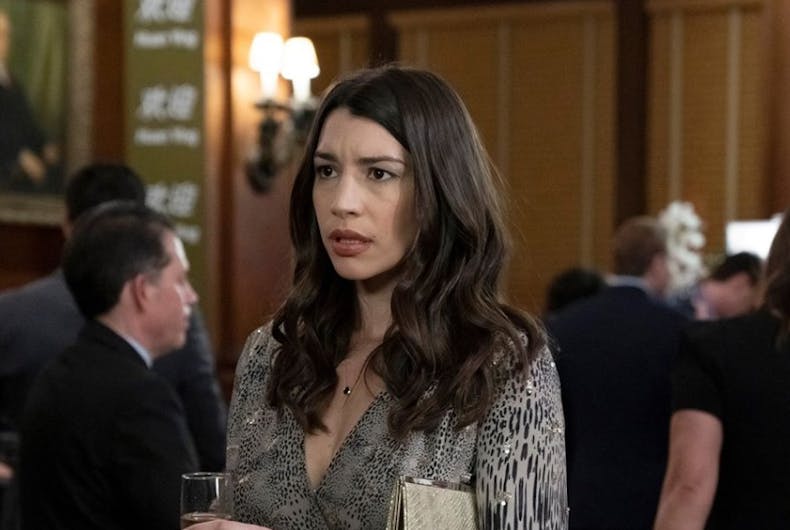 Officer Katriona Tamin, played by Jamie Gray Hyder, is talking with another character about her plans for the evening. She pulls out her phone, opens a dating app, and says, “What do you think? Gene or Gina?”

Related: Nielsen found the most popular shows for LGBTQ people. They may surprise you.

SVU, which is a spinoff of NBC’s immensely popular Law & Order, is in its 21st season, and now it has its newest LGBTQ main character.

Tamin was introduced earlier in the season, but fans of the Law & Order franchise know that the show isn’t about the officers’ personal lives and details about them are rarely mentioned on screen. So it wasn’t unusual for her to come out in an episode well after she was introduced as a character.

Hyder talked to E! News about why it was important that her character’s coming out be so casual.

“I think that kind of bringing it up in this very casual way is important because it doesn’t need to stand out,” she said. “I think by it not totally standing out to the members of the squad, it really will help the community with acceptance when it comes to that community.”

She said that her character’s identity is important now in particular because of the attacks on LGBTQ equality.

“Sadly in the last year, the support for the LGBTQ community has eroded,” she said. “You can see it in statistics and in surveys. It’s scary and it’s sad.”

“I think that now is a better time than ever to present a member of this community in a way that reminds you that we’re all the same and that we’re all human beings.”

Hyder said that writers worked for months to come up with ways to make her character bisexual without playing into stereotypes.

“Really our main goal is to represent a full human being, and to have the opportunity to open up our cast to the LGBTQ community is one that I think they’re very excited about,” she said. “It’s a choice that I definitely take very seriously and comes with a lot of responsibility, I think.”

“I want to present a whole person and Kat’s sexual orientation is only a part of who she is,” Hyder said. “And while it’s a very important part to her, I think the goal, in the end, is to present a whole and nuanced human. It’s important to me as a person to make sure that while Kat’s bisexuality definitely informs a lot as to her life, it’s definitely not the only aspect of her life.”

The last regular LGBTQ character on the show was Dr. George Huang, played by B.D. Wong, who left during season 12.