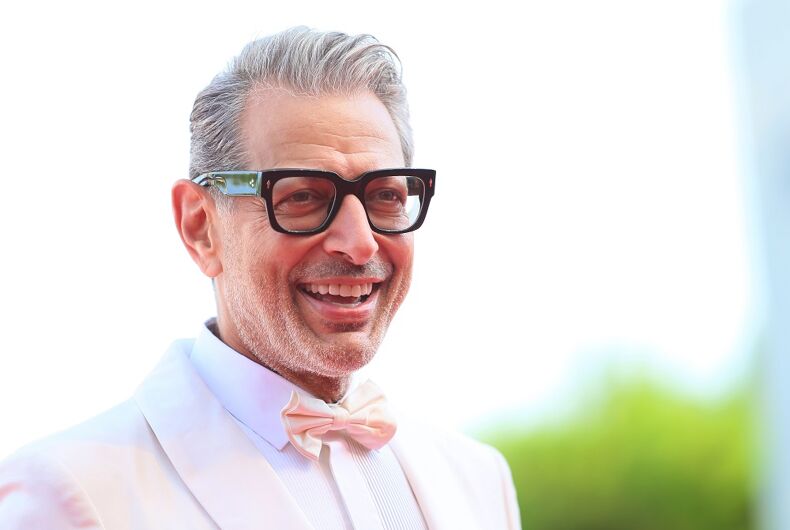 Actor Jeff Goldblum was a guest judge on Rupaul’s Drag Race last week and he has faced sharp criticism for his question about Muslim drag queen Jackie Cox’s background, specifically asking her if there’s “something in that religion that is anti-homosexuality and anti-woman? Does that complicate the issue?”

Giving Goldblum the benefit of the doubt, he could have been attempting to clarify a misconception. But at the same time, Westerners assume that Muslims, on the whole, are homophobic and sexist and that Muslims are somehow more violent against gender and sexual minorities.

This trope goes back to how Europeans painted Middle Eastern people as barbaric and savage during the Renaissance and the Age of Exploration, centering Europe as the hallmark of civilization and culture. Today, being civilized has come to mean that a country treats women and sexual minorities with dignity and respect.

While these tropes have a long history, they were rehashed and magnified post-9/11 when Westerners criticized Muslim women for wearing face and hair coverings, when the reality was that many wear the hijab to proclaim their religious and cultural identities.

The outpouring of love I’ve received for this look has been incredible. Our prompt for this runway was “Urban Streetwear with a Political/Protest vibe.” When working with my designer, @daviddalrympleinc (with nails by @nailsforqueensnyc ), we talked a lot about our shared experience as children of Middle Eastern immigrants, his family from Syria, and mine from Iran. The Arab/Persian Spring protests from 2009/2010 were symbolic across the region, and though they ultimately have not led to the flourishing of democracy some might have hoped for, they were important nonetheless. The headscarf, which is required by law for women in many countries of the Middle East, including Iran, is a symbol of both religious freedom and oppression. I choose to embrace the freedom to wear this as a symbol for the beautiful Persian and Muslim women in my family, and also as a reminder that I am lucky to live in the United States where I can choose to express and honor my heritage with the hope that it will be tolerated and celebrated. I am so grateful to @rupaulsdragrace @rupaulofficial @worldofwonder and @vh1 for giving me this platform to shed light and spread love. Remember, HATE is the enemy and LOVE is the only ally we can turn to. #DragRace

While sexual assault and gender discrimination are rampant in the West, Americans and Europeans have consistently applied a double standard to non-Western countries in order to further demonize groups that are not Christian or white. For example, violence against women and sexual assault occur at horrific rates in America. In the U.S., 43 percent of homeless teenagers are LGBTQ because they’re disowned by their parents.

This is where Islamophobia (and by extension racism) comes to play.

“Jackie Cox is NOT a genie… but don’t tell her that!” 💖🧞‍♀️ Another #throwbackthursday to my #IDreamOfJackie Photoshoot by @prestonburford … FOR YOU! This print is also available on my T’s (swipe through to see them on cutie @chrissandersnyc in a shot by @michaelhullphoto )! LINK IN BIO 💖 My sis @thechelseapiers did my makeup for this shoot!

There are 1.7 billion Muslim individuals, so there will be great diversity in our communities. There are going to be sexist and homophobic Muslims, as well as open-minded Muslims. For example, the Public Religion Research Institute found that a majority of Muslims in the U.S. favor marriage equality. And in fact, Muslims for Progressive Values, led by Ani Zonnenfeld, attempts to carve space for marginalized sexual and gender minorities in Islam.

Religious scholar Reza Azlan has noted that sexism, homophobia, and other problems are country-specific, not religion-specific. For example, Pakistan that has elements of sexism and homophobia that Westerners deride, especially with LGBTQ individuals being forced into heterosexual, arranged marriages in order to appease their families and communities.

However, Pakistan has had a female prime minister – Benizhir Bhutto – and has extensive rights for transgender people. While I am not arguing that Pakistan is liberal and I agree that there are elements of Pakistani society that are harshly homophobic and sexist, homophobia and sexism can exist everywhere.

When Goldblum asked Jackie Cox about whether her culture is homophobic and sexist, Goldblum was seemingly unaware of loaded baggage that question entailed. There is no way to know his intentions, but at the same time, his actions are very much nestled in a broader cultural framework that creates double standards for racial and religious minorities, especially when they revolve around gender and sexual minorities.