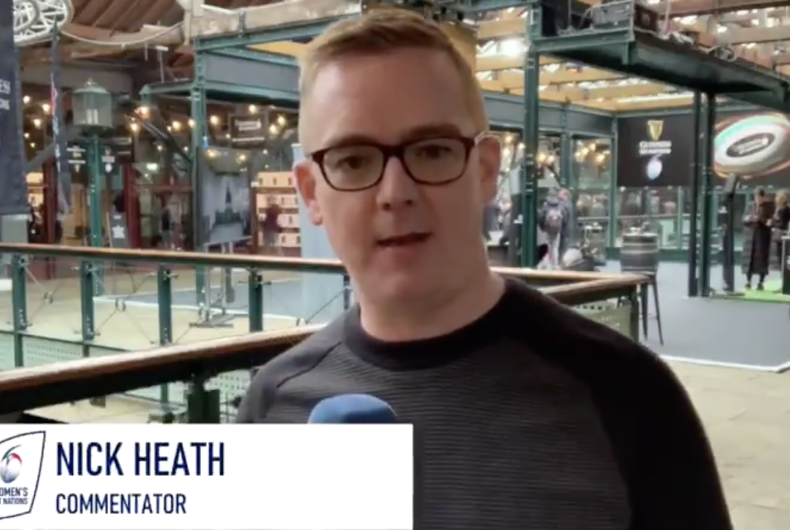 Like many people, Nick Heath has a lot more time on his hands as every major sporting event around the world has been cancelled or suspended. Heath is an out sports commentator and journalist who covers athletes and sports events around the world.

Now, he has had to find a new outlet for his love of sports, and thankfully for us, he did – a series of videos he bills as #LifeCommentary/#LiveCommentary.

In the videos, Heath translates his talents for energetically describing actions happening on the field into describing commoner’s activities, such as dogs chasing each other, or a woman crossing the street.

Heath, based out of London, relayed in a recent interview that after local sporting events were shut down – but daily life in the U.K. remained pretty normal – he saw “a chance for me to go out and have a bit of fun.”

“I’ve sort of referred to it a little bit as almost being the placebo for real sports because sport for me is as much about the sound of it, the look of it, the feel of it as the action itself,” he explained to USA Today Sports. “So I think if you can embody the sound of it to a degree, then you’re almost scratching the itch for some people.”

2020 Crossroad Dash #LifeCommentary #LiveCommentary Stay positive and follow the advice folks. The sooner we shut ourselves away from each other, the sooner life returns as normal. #commentator #tootingcommon #football #nicholasfumble #final #media #sport #broadcasting

Still, Heath admits that “It’s scary not knowing when the next actual game might be.” As a freelancer, he’s paid by the game, so there isn’t a clear path to his next opportunity to earn income.

Luckily, with his new viral sensation has come plenty of helpful fans that are submitting donations to him via PayPal. It’s also earned him a featured appearance on BBC, so his moment isn’t going to go away quite yet.

In fact, this isn’t his first time becoming a hot topic online – a video response he issued last year, directed at anti-gay Australian rugby player Israel Folau, also bought him a great deal of attention. It was viewed over 500,000 times.

Referring to one of Folau’s social media posts that claimed that listed people like “adulterers, thieves, fornicators, homosexuals” as going to hell, Heath answered, “There’s one on that list isn’t a choice.”

“I didn’t really want to be that way. But the fact that I am and got to grips with it and supported by my friends and family means I’m perfectly happy with my life,” he told viewers.

Heath points out, “Saying that being gay is a sin that you should repent for… ultimately, that’s going to cause harm to hundreds of thousands of millions of people. If you can’t see that, then I don’t even know where to start.” Folau was released, but ultimately received a settlement from his former team for his remarks.

As a gay rugby commentator, I’ve had enough of God-fearing athletes telling me I need to repent for my sins. 🏳️‍🌈 pic.twitter.com/vindiAUdBF

Heath, who is married, has worked as a play-by-play announcer for several other sports leagues such as Women’s Six Nations, the Rugby World Cup and the Gallagher Premiership. He is also a producer of the rugby podcast Cue Commentator, his own deep dive into the art of commentary.

“Nick has played a big part in helping raise the profile of the tournament,” League executive Julian Maddock has said. So, once sports resume, opportunities for the commentator should remain abundant.

While we’re all hoping we can return to some sense of normality soon, Heath will have a new huge new fan-base to cheer him on along the way.