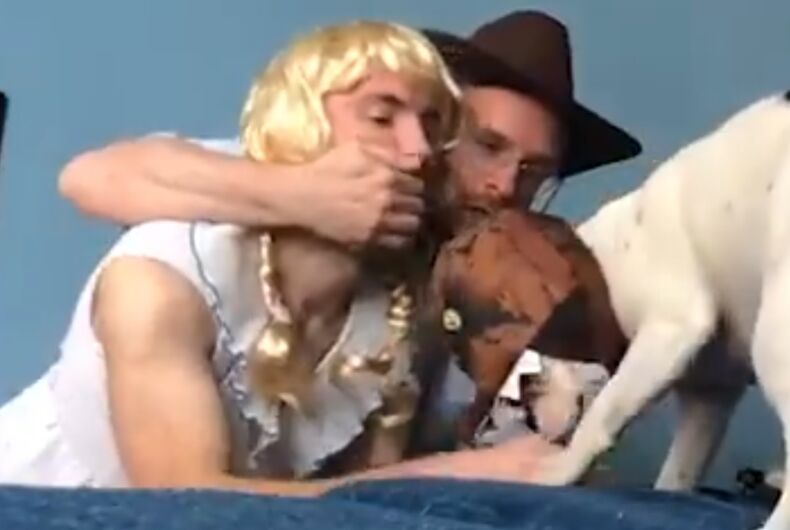 Don't move! He can't see us if we don't move.Photo: Twitter screenshot/Anthony Baxter

A gay couple and their dog re-enacted iconic scenes from Jurassic Park to pass the time during confinement.

London Live news presenter Anthony Baxter and Rob Slade posted the end result to Twitter with the simple message: “The dog was so bored he made us do this.”

Related: This is how a proper queen goes to the fridge for a snack during quarantine

Baxter and Slade each took on different roles from the classic Steven Spielberg film and brought some of the best-known lines to life, like when paleontologist Alan Grant tells John Hammond’s granddaughter Lex not to move so that the Tyrannosaurus Rex – played by the Yolk the French bulldog – won’t be able to see them, and when paleobotanist Ellie Sattler turns on the park’s electricity and inadvertantly zaps Hammond’s grandson Tim.

The dog was so bored he made us do this, ft. @Rigil pic.twitter.com/bFKlVPyZjG

Fans are already asking them to cast their dogs in the sequel.

Oscar is available for the next instalment pic.twitter.com/fBLLRhYDrc

The video has been viewed over 7000 times on Twitter, more than twice the number of followers Baxter has.

Gay Republicans praise Trump for easing the gay blood ban, but he didn’t even know about it

Oh, Andy. You’ve turned me into a Cuomosexual.