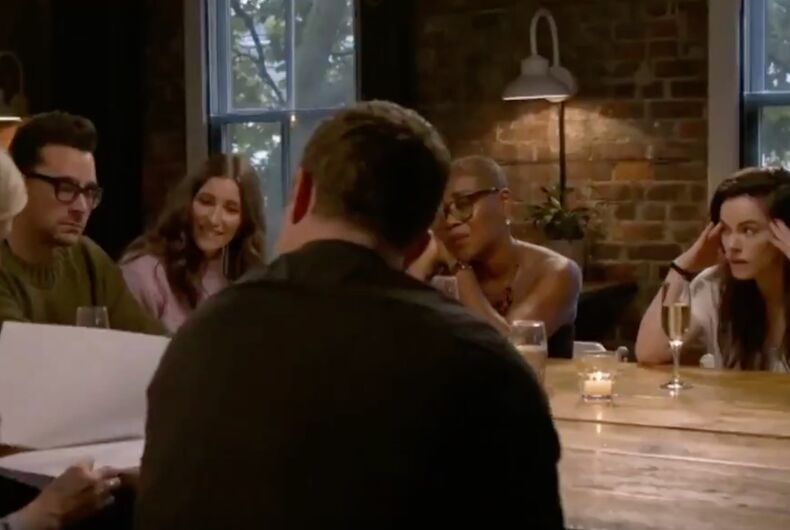 The cast of Schitt's CreekPhoto: Screenshot

Schitt’s Creek may have come to an end, but the inspiration to LGBTQ kids that the show provided will live on forever.

The cast found out just how much the show meant when they were read a letter from a Serendipity Doo-Dah for Moms, a Facebook group of over 5,000 mothers of LGBTQ kids. By the end of the letter, the cast was in tears.

Related: A TV show is advertising with a giant gay kiss on a billboard in Los Angeles

“Your commitment to representing love and tolerance in your show is so important to families like ours,” the letter read. “Your willingness to explore, inform and educate about LGBTQ people and their relationships in an entertaining but respectful and positive manner sets a tone that is often missing.”

“You have created new ways for queer viewers to see themselves represented, and in its own way, that is just as important as the battles we are still fighting. Therefore, the work you have all done on Schitt’s Creek has encouraged us greatly and given us hope about the future for our kids.”

“We sincerely believe,” the letter continued, “that shows like Schitt’s Creek will serve as a catalyst to help change the world into a kinder, safer more loving place for all LGBTQ people to live, and because of that, we will remain forever grateful. You’ve made a lot of mamma bears happy and as a result, you have a whole bunch of fans forever.”

Co-star Noah Reid read the letter to the roundtable of castmates.

a group of moms with LGBTQ kids wrote a truly beautiful thank you letter to the cast of #SchittsCreek & I couldn't stop crying as it was read aloud to the actors pic.twitter.com/2oULXjliT9

You don’t have to be the perfect “gay parent” right now. We’re all doing our best.