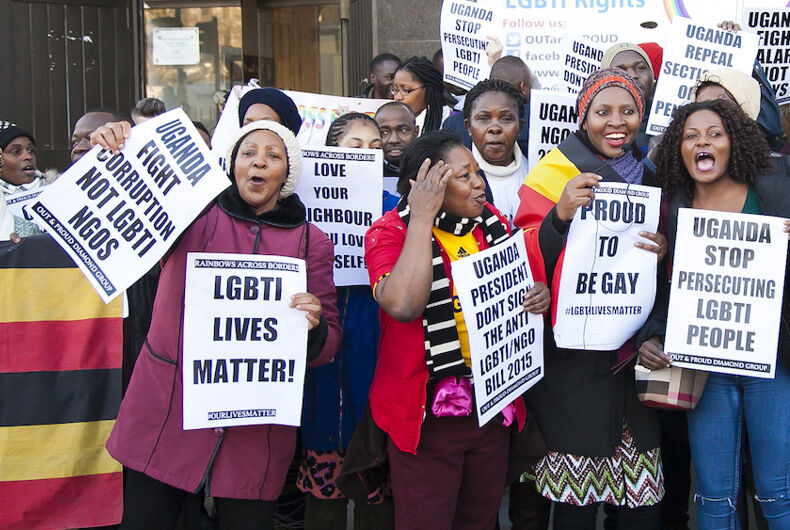 Police in Uganda raided a shelter and now 20 LGBTQ people could get up to nine years in prison.

The shelter, located in the outskirts of the capital Kampala, had already drawn complaints from neighbors because of LGBTQ people who live there. Now human rights advocates say that the police used coronavirus social distancing measures as an excuse to persecute the sexual and gender minorities.

Fourteen gay men, four transgender women, and two bisexual men were arrested in the raid yesterday. Three others were also arrested but have already been released for medical reasons.

Police said that the people were “congesting in a school-like-dormitory setting within a small house,” which violates the country’s ban on gatherings of over 10 people – since reduced to five – put in place to contain coronavirus.

Those arrested are facing two charges: disobeying a lawful order and committing neglectful acts likely to spread infection of disease. The first charge carries a maximum sentence of two years in prison and the other seven years.

Deputy Police Spokesperson Patrick Onyango scoffed at the idea that the LGBTQ people were arrested because of their identities.

“We still have offenses of unnatural sex in our law books,” he told Reuters, referring to the ban on “unnatural offenses” that carries a life sentence. “We would charge them with that law, but we are charging them with those counts as you can see.”

But LGBTQ advocates are skeptical. Sexual Minorities Uganda Executive Director Frank Mugisha told the Guardian that it was “a clear case of discrimination.” He said that the neighbors have long complained about the shelter.

“The arrests were initially around homophobia and transphobia because neighbors reported them and so the security forces came and raided them,” he said.

Mugisha explained that the raid will only increase the risk of coronavirus spreading, saying “These people were at home and they all know each other. Now they are putting them in prison where they will be more at risk.”

Patricia Kimera is a lawyer with Human Rights Awareness and Promotion Forum, the organization defending the group. She said that it’s common for police in Uganda to arrest LGBTQ people on charges other than unnatural offenses.

“They are always using alternative charges to arrest people for unnatural offenses so [coronavirus] just worked perfectly for them,” she said. “But definitely the reason they have been arrested is their sexual orientation.”

For example, last year a known gay-friendly bar was raided and over 100 people were arrested for smoking from hookahs – which are used to smoke tobacco – but authorities said that the arrestees were smoking banned narcotics.

LGBTQ people in Uganda have reported an increase in hate speech since the beginning of the global pandemic, with many people blaming LGBTQ people for the disease (like some are in the U.S. and in other countries).

And Uganda was already a difficult place to be openly LGBTQ – many members of parliament have been trying to pass a law to impose the death penalty on homosexuality over the past decade.

So far, Uganda has had 44 confirmed cases of coronavirus and no deaths, according to Johns Hopkins University.

What the U.S. Census means to LGBTQ people & why you should fill it out. Now.