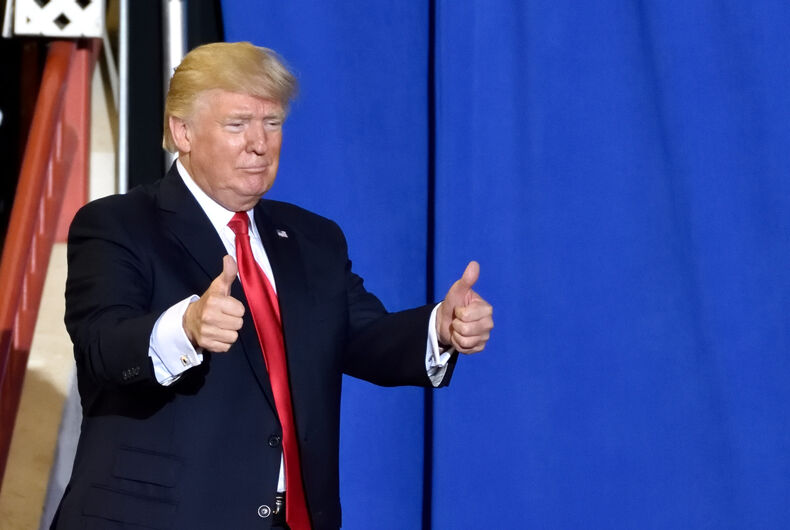 President Donald Trump spoke on a phone call with evangelical leaders hosted by an anti-LGBTQ hate group and thanked them for their political support. But instead of focusing on calming their flocks during a global pandemic, the president urged them to focus on his re-election.

“It’s a big date, November 3,” Trump said. “That’s going to be one of the biggest dates in the history of religion, as far as I’m concerned. So, I want you to be, we have to keep aware of that, ‘cause as we fight this, people are forgetting about anything else. You turn on the news, and all you see is the coronavirus or whatever.”

“You turn on the news, and all you see is the coronavirus or whatever — some people call it the Chinese virus, they call it a lot of different things — but the virus, that’s all you see. You don’t see anything else,” Trump added.

“So people are forgetting we have the most important election that we’ve had, and I guess when I say the 2016 election, perhaps that’ll always be very special for all of us, but without this one, without a victory here, so much of that can disappear.”

Trump touched briefly on the virus and the work the ministers were doing to combat it or comfort victims’ families. But he quickly steered his impromptu remarks to what he had done politically on behalf of the religious right.

He made sure to point out that his administration “knocked out the Johnson Amendment.” The tax code provision prevented not-for-profit organizations like churches and charities from endorsing or opposing political candidates.

The conference call was organized by the Family Research Council. The organization has been recognized as an anti-LGBTQ hate group by the Southern Poverty Law Center, a group that tracks hate groups in America.

But even Tony Perkins, the group’s leader, couldn’t steer Trump back to the actual topic of the coronavirus. When he asked Trump how he would like for the assembled pastors to pray for him, the president didn’t fail to promote himself.

“Well, I think the health of our country, the strength of our country. We were doing something amazing and then one day, it just ended,” he said. “So that would be it, and the fact that we make the right choice on November 3 is very important. Tony, you understand that better than most.”

Perkins is a former Republican Louisiana politician with deep ties to white supremacists. He is also one of Trump’s biggest evangelical supporters.

Perkins had previously downplayed alarm over the virus as “irrational,” arguing that it was being used as a political weapon against the president. Within two weeks, as with many right-wing pundits and television news personalities, he had changed his tune to urge followers to be follow proper precautions… and to work to prevent the economy from tanking.

“Follow the guidelines, do the social distancing if you have a stay-at-home order in place in your state and you’re not a part of an essential frontline, workers, you know, try to stay home, work from home, try to be productive — please be productive,” he said. “Our economy needs it.”

Vice President Mike Pence, a fervent supporter of the religious right, was also on the call. He was originally supposed to be the main speaker until Trump crashed the phone call.