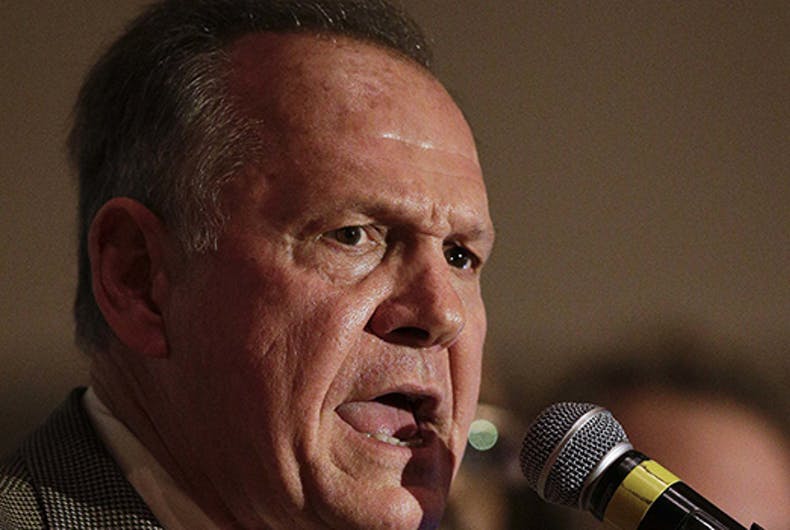 Roy Moore – the former Alabama Supreme Court justice who has made a career out of opposing LGBTQ equality – has filed a brief asking the Supreme Court to end marriage equality.

The case also involves Kim Davis, the former county clerk from Kentucky who refused to issue marriage licenses to same-sex couples – and then to all couples – after the Supreme Court legalized marriage equality in all 50 states in the 2015 Obergefell v. Hodges decision and who, she said, was acting “under God’s authority.”

Davis was sued by several couples who were denied marriage licenses and eventually lost her request for a religious exemption to doing her job. She also lost an appeal, and now she’s asking the Supreme Court to look at her case.

Enter Roy Moore. The organization he founded, the Foundation for Moral Law, filed a brief supporting Davis and it went one step further and asked the Supreme Court to overturn Obergefell entirely.

Moore was famously removed from his job as chief justice of the Supreme Court of Alabama in 2003 when he refused a federal court order to take down a display of the Ten Commandments from his courtroom. He was again elected as chief justice in 2012, and in 2016 he was suspended for telling lower court to ignore Obergefell and not issue marriage licenses to same-sex couples.

And his antipathy toward LGBTQ people runs deep. In 1996, he presided over a divorce case involving a lesbian woman and her straight husband. He ruled that the lesbian could only see her children with supervision because the kids would be “detrimentally affected” by the lesbian mom’s “lifestyle” because it is “forbidden both by the laws of the State of Alabama and the Laws of Nature.”

So Moore and Davis are natural allies.

Moore’s wife Kayla Moore runs the Foundation for Moral Law, and she said that they think they have a shot of overturning Obergefell now that Anthony Kennedy is no longer on the Supreme Court. Kennedy wrote the opinion in Obergefell and was joined by the four other liberal justices on the Supreme Court, and he has since been replaced by the conservative Brett Kavanaugh.

“Now that Justice Kavanaugh has replaced Justice Kennedy, we hope that the Supreme Court will once again allow the states to recognize marriage for what it is: a union between one man and one woman for life,” Kayla Moore said.

The “for life” part of that statement is bizarre coming from Kayla Moore, who divorced her first husband less than a year before marrying Roy Moore.

Moore got national attention in 2017 when he ran for the U.S. Senate. He ended up losing to Democratic candidate Doug Jones after several women came forward with sexual assault and sexual harassment allegations against Moore, including some who said they were minors when he attacked them. Moore denied all wrongdoing but ultimately lost the election.

Earlier this year, he lost the Republican primary for U.S. Senate.

A conservative told Disney’s CEO LGBTQ characters are ruining his business. He wasn’t having it.