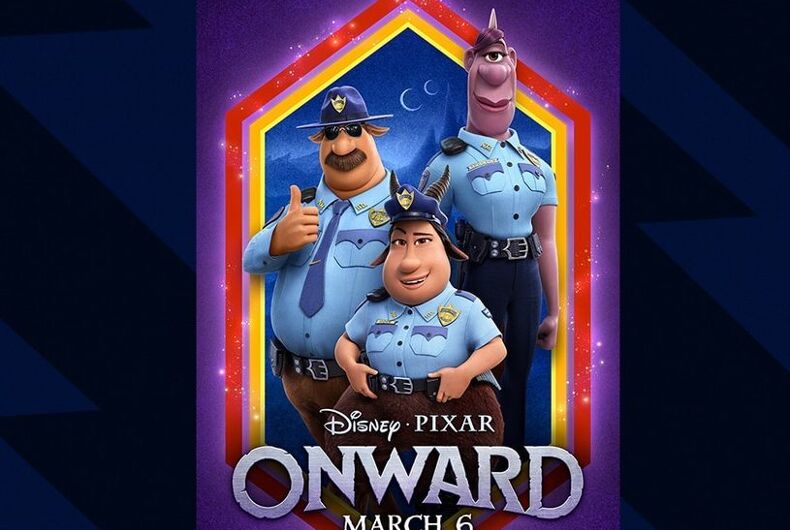 One Million Moms, the front for the SPLC-rated hate group American Family Association, has found the latest target of their outrage in the upcoming animated film Onward.

The film, starring Chris Pratt and Tom Holland in the lead voice roles, also features Lena Waithe as a lesbian cyclops police officer, Officer Specter. During her one scene, Specter talks about raising a child with her girlfriend in passing.

This may mark Disney’s first open and out LGBTQ character to speak in one of their films, although there has been several hidden examples of representation in the company’s movies over the last few years. Despite not appearing in trailers or most official promotional material, film producer Kori Rae and director Dan Scanlon talked about the character and Waithe at length last week. Out singer Brandi Carlile will also have a song on the Onward soundtrack.

Since the character is already being considered for a spin-off, One Million Moms – which is really led by a single employee, Director Monica Cole – felt it was the right time to attack Disney and Pixar for trying to “indoctrinate children with the LGBTQ agenda.”

So thrilled to put this out into the world today! I think this is going to finally impress my kids. :)@pixaronward pic.twitter.com/9HFwohf1vh

“There have been numerous attempts by Disney to indoctrinate children with the LGBTQ agenda discretely and now more overtly,” Cole writes in her latest ‘campaign’. She calls on conservatives to boycott Disney and “make sure [your friends and family] are aware of the gay character.”

“These scenes are subtle in order to desensitize children. But now Disney has traded its subtlety for intentionality,” Cole claims. “Disney has decided to be politically correct instead of providing family friendly programming. Disney should stick to entertaining, not pushing an agenda.”

The campaign asks for people to “take action now” by filling out a form that alleges to tell new Disney CEO Bob Chapek that his company has “left conservative and Christian families no other choice but to avoid Onward.” You have to provide your entire name, email and ZIP code – in addition to signing up for OneMillionMoms.com to contact you “about important future issues.” The site claims over 20,000 people have taken ‘action’ on its website.

This is just the latest of the American Family Association/One Million Moms’ several attempts to create an outcry over LGBTQ representation in media. Their other targets in the last three months include Sesame Street, Clifford the Big Red Dog, Burger King, the Hallmark Channel, Chick-fil-A and the Super Bowl halftime show and commercial that aired with drag queens.

Onward is due in theaters starting on March 6.

It’s almost time for #PixarOnward. 🦄✨Get your tickets now and see the film in 5 days. https://t.co/WyPhLoenAA pic.twitter.com/DSxioXn0fI

The religious right got up in arms about LGBTQ curriculum. This out board member responded.