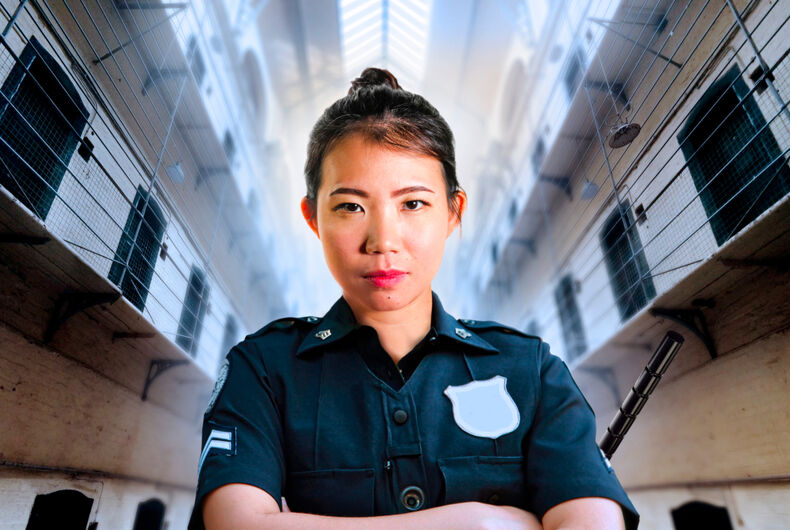 Two lesbian prison officers are suing their state’s prison system after they faced years of harassment and taunting from coworkers. Now they’re suing.

Michelle Wood, 52, and Sgt. Loretta Smith, 53, are a couple and they worked at the Thumb Correctional Facility in Lapeer, Michigan. They say they were harassed, denied a promotion, given bad shifts, and called slurs because they’re gay, and now they’re suing the Michigan Department of Corrections.

In the complaint, Wood said that she was harassed for years by her coworkers, who called her names like “dyke” and “carpet muncher.” One told her, “Stanley Steamer has nothing on you.”

Wood said that it wasn’t just harassment that was directed at her that made the workplace hostile. Coworkers would regularly use the word “fa***t,” like “I can’t stand fa***ts” and “Fa***ts make me sick.”

She said that she complained to the MDOC starting in 2008, but that instead of making things better, her employer retaliated against her.

“The MDOC even went so far as to accuse Wood, who was known by all to be a lesbian, of having sex with a male prisoner in an attempt to get her fired,” her complaint says.

In 2017, she faced discipline for carrying a glasses case on the job that she had been carrying for years. She was also disciplined for walking a dog used to treat PTSD in prison, something that her straight colleagues had done without facing discipline.

“Ms. Wood was followed and spied on by a known LGBTQ hater and harassed so bad she was eventually driven out of the department.”

“It doubled my stress level, to say the least,” she told the Detroit Free Press.

Wood complained all the way to MDOC Director Heidi Washington, but she didn’t get any help.

“I repeatedly begged them, Heidi Washington specifically, to try to come to some resolution so I could resume my employment,” she said. “I got nothing.”

Wood resigned last October after 25 years of working for the MDOC, but she said that she was essentially fired because she couldn’t keep working there.

She also claims that the MDOC retaliated against her partner, Smith, by moving her to the night shift after Wood complained.

Smith and Wood have been together for 17 years. Smith used to work at a different prison, and she transferred to Thumb in 2015.

But she faced the same harassment that Wood did. The lawsuit says that they “could not even converse or eat lunch together, as their heterosexual counterparts would, without judgment, looks, and comments from others.”

They filed their lawsuit under the state’s anti-discrimination act, which does not include sexual orientation or gender identity.

So a court will have to decide whether state law bans anti-LGBTQ discrimination before the facts in the case are even looked at.

“What happened to Michelle and Loretta is not an isolated event, and in today’s day-and-age there should be no tolerance of prejudice or discrimination in our state government, whether you are gay or straight, black or white, man or woman, whatever,” said their attorney Jon Marko in a statement. “Hate has no place in our state.”

The MDOC isn’t commenting on the case, but they said in a statement that they are committed to diversity.

“The MDOC takes allegations of discrimination in the workplace, no matter what type — race, sex, orientation, identity — seriously and investigates such claims as soon as they become known to the department,” a spokesperson said. “Also, retaliation is not tolerated in this department and all claims of such are investigated with the utmost seriousness.”

Smith still works for the MDOC.