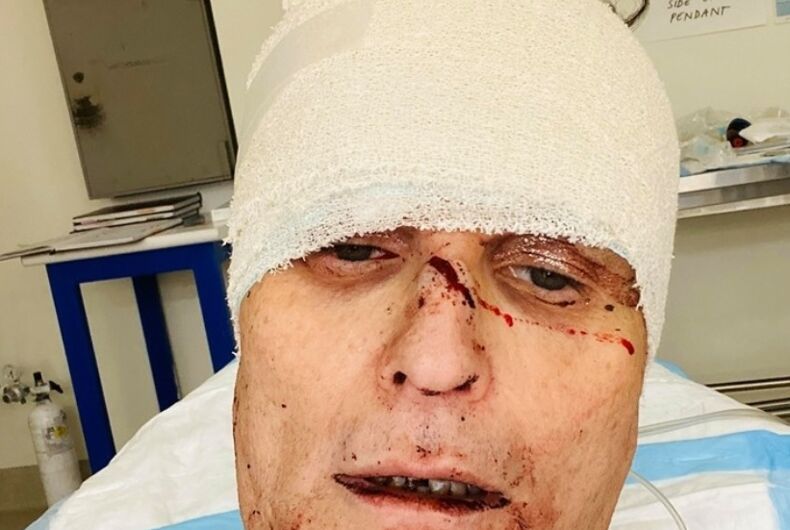 Two men attacked a gay man with a meat cleaver and threatened to cut off his genitalia in a horrifying home burglary, leaving him with scars and other injuries all over his body.

Joseph Stanislav was planning to attend Sydney Gay & Lesbian Mardi Gras at 2 p.m. on February 29 when two men entered his home and attacked him.

Related: A ‘bloodthirsty’ mob hunted down a gay man & his brother before beating them in a mall food court

Jay Ehlrich, 18, and Thomas Bowen-Hughes, 21, allegedly demanded money and turned his apartment upside-down as they searched for valuables.

“They said, ‘You’ve gotta have more money than this. You live in Bellevue Hill,” Sanislav told the Star-Observer.

But when the alleged burglars Stanislav’s make-up in the bag, and they were enraged.

He said both of the men’s “eyes went black,” an expression that means they got angry.

“I had to reach for my phone to get the statement up, but when I reached for it the guy with the meat-cleaver jumped and smashed me in the face,” Stanislav said.

“I had to keep my composure, otherwise these guys were going to kill me,” he said.

“Then one of them held up the knife and said, ‘Just do as you’re told or we’re going to cut your cock off. We’ll make you into a real girl.’”

“I felt the cold blade go straight into my forehead, my nose, and my eyes,” Stanislav said.

When police arrived, Stanislav was taken to the hospital for treatment.

Ehlrich and Bowen-Hughes appeared in court this past Monday, but local media has not reported what they are being charged with. They were denied bail.

Jim Morris, one of Stanislav’s Facebook friends, saw a post about the attack and put together a GoFundMe page to raise money for him.

“I am so frightened to go home,” Stanislav said on the GoFundMe. “I am totally broken on the outside and inside especially my heart. I wouldn’t wish this on my worst enemy what I had to go through.”

“The page in question has been verified by our Trust and Safety team during our routine verification processes,” GoFundMe Australia Regional Manager Nicola Britton said in a statement.