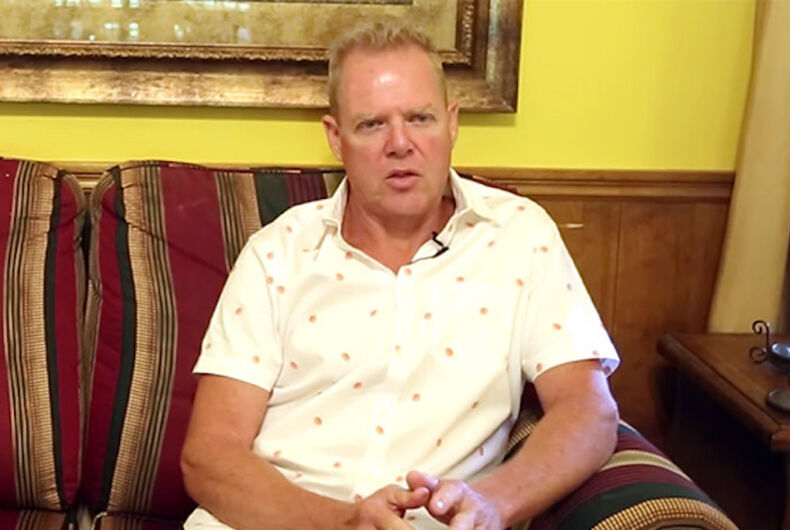 McKrae Game — the former head of Hope for Wholeness, a Christian group that promoted so-called conversion therapy for those people “looking for a way out of homosexuality” — recently wrote a column for The Guardian about the events that lead him to promote “ex-gay” therapy for close to 28 years. Game came out as still-gay in 2019.

Game founded Hope for Wholeness (originally called Truth Ministry) in 1999 and was eventually fired by its board of directors in 2017. He said that his shame growing up in a homophobic society, the anti-gay nature of the church he attended, and his first boyfriend being sent to prison all contributed to his deluded crusade to change his sexual orientation and that of other people.

Living in his own apartment at age 18, Game had his first gay sexual experience with his upstairs neighbor after having some beers together.

“He was much older than me,” Game said, “and I wasn’t attracted to him, but I wanted to experience what it was like to be with a man. Afterwards, I felt awful about what had happened.”

Game wrote he later felt “at home” when patronizing his first gay bar during his early 20s, during the height of the HIV epidemic.

Game, who is now 52, said he’d only ever heard negative things about gay men while growing up. He secretly longed for “a wife and children, and a happy home with a white picket fence.”

His first boyfriend went to prison for a drunk driving vehicular manslaughter incident. Devastated, Game didn’t feel like he could even talk to his own parents about what was going on. Whenever Game spoke to them on the phone, he’d just cry.

After a few months attending an anti-gay church, Game said, “I felt as if I’d found something of meaning: I believed that God loved me and had a plan for me – and that plan did not include homosexuality.” Later on, Game became a self-described zealot and felt as if he was “on a mission from God” while counseling hundreds of clients about getting rid of their own same-sex attraction.

Game married a woman, and while he was honest with her and his clients about his continued interest in gay pornography, he struggled not to view it. In fact, that struggle lead the board chairman of Hope for Wholeness to fire him.

About 18 months later, Game posted on Facebook, “I have no room for hate in my heart. I know I’m not anti-gay. I am gay.” While most messages he received after his admission were positive, others blasted him for his hypocrisy and his lifelong work harming other gay people with his so-called “therapy.”

In a September 2017 profile on Game, he said, “Conversion therapy is not just a lie, but it’s very harmful. Because it’s false advertising.”

He now says, “I feel as if I escaped a cult: I was brainwashed for 28 years. I’m now able to start exploring who I authentically am.”

Here’s a 2019 video in which Game disavows his past work in ex-gay conversion therapy: