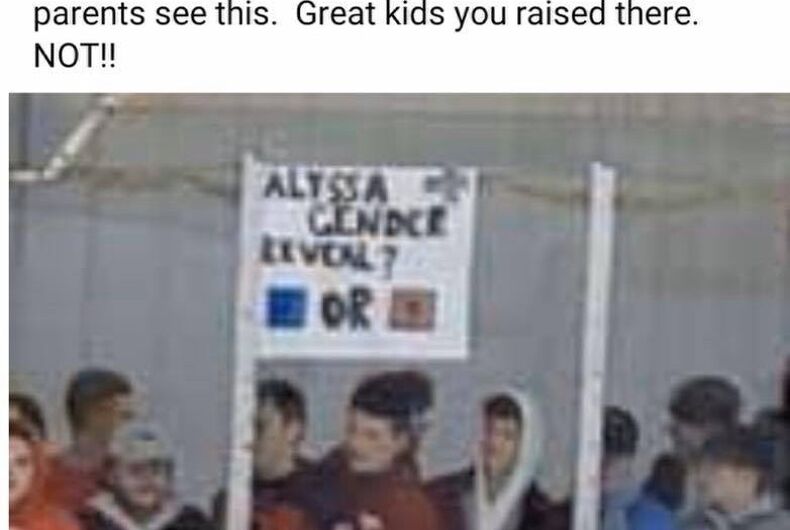 Fans of a high school hockey team shouted slurs at a female hockey player while holding a sign asking her to “reveal” her gender. 17-year-old Alyssa Wruble is the only girl on the Northampton Area High School varsity hockey team.

A group of the opposing team’s fans chanted “she has a penis” and “35 you’re a dude!” at the girl. They also held up a sign that asked “Alyssa gender reveal?” and had pink or blue checkboxes.

After Wruble’s aunt posted a photo of the sign and a lengthy condemnation of the opposing team, the coaches, and fans, community outrage has prevented the incident from being brushed under the rug.

“Wow they need to be expelled,” one commenter wrote on the post. “That coach and principal should be fired for that sign alone! You rock, Alyssa!” another said.

Even students and staff from Parkland commented on the article to show support and some information on how the school was handling it internally.

“As a teacher at Parkland High School I find this whole incident incredibly embarrassing,” a teacher posted.

“First, I’m sorry you had to put up with this kind of behavior. Second, the principal addressed this after the morning announcements today. He was disappointed that no one went over and removed the sign once it was put up and also lectured the students on how inappropriate this was. They have apparently been investigating it since the time it was seen at the game. Just trying to fill everyone in. It’s an embarrassment that this happened at the school i graduated from, and now work for,” another employee posted.

“There is no place for unsportsmanlike conduct or personal harassment in our school, or any where, and anyone involved will be disciplined according to Parkland policy and procedures,” the school district said in a prepared statement.

Mike Byelick, the former president of Parkland Ice Hockey who resigned after the incident, told Lehigh Valley Live that “We do not agree with it nor condone it. It’s unfortunate. We are handling it internally and working with the school district as well.”

The club’s vice president said he had reached out to Wruble’s mother in a direct message asking to apologize to the student. She hasn’t responded yet, saying it only happened after hundreds of negative comments on the Facebook post and she was concentrating on Wruble’s next game.

So here it is… My first serious rant on social media.Those of you that know me, know that I generally do not do a lot…

Virginia passed a statute governing trans birth certificates in 1979. It wasn’t controversial then.

How late (and where) can I vote today?