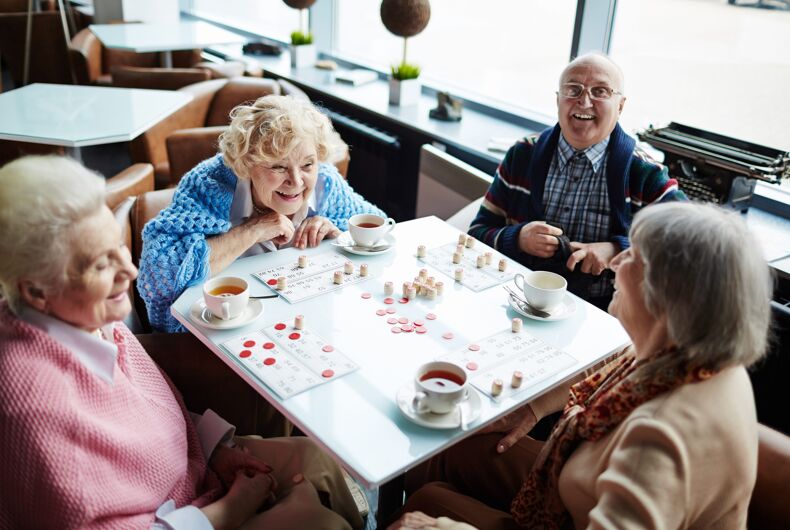 For years Benjimen Blair has hosted drag queen bingo events at senior centers to raise money for charity. His alter-ego, Sylvia O’Stayformore, has raised hundreds of thousands of dollars for elders, but now state police are threatening him with felony gambling charges.

The Washington state gambling commission investigated the charitable games for two years before issuing a cease-and-desist notice and referring the man to police. No one has alleged that Blair did anything more than raise money for charity, just that he didn’t follow an obscure rule.

“Over the past two years, investigations by (special agents) … have confirmed that Rainbow Bingo has held numerous bingo events that were in direct violation of the Washington State Gambling Act,” the letter states. “You must immediately cease the operation of these bingo games that are illegal in Washington State.”

“It’s insane,” Lyle Evans, director of the Senior Center of West Seattle, told the Seattle Times. “I can give you no idea why the state of Washington decided to crack down on nonprofit senior centers.”

“A lot of senior centers have cut back on bingo now or stopped holding bingo completely,” Susan Kingsbury-Comeau, who runs the Mt. Si Senior Center, added. “We’re senior centers, not casinos. The gambling commission just showed up here and started going through our books.”

“People come in costumes, it’s a real party. It broadens the senior center out to the wider community. It’s not some big gambling event.”

Under state law, each senior center has to have a special gambling license to hold the events and follow a bingo code rule book more than 100 sections long that includes directions on everything from the type of machine that blows balls around to the layout of the bingo cards.

Included in those rules, it says that anyone calling out the bingo numbers must be an employee of the business that holds the gambling license. Since Blair isn’t employed by the multiple senior centers he’s been helping, the state says he’s been committing a felony.

“The individual (Sylvia) operated bingo by calling bingo balls and/or verifying winning bingo cards at licensed bingo events,” Tina Griffin, assistant director for Licensing, Regulation and Enforcement at the gambling commission, explained in an email to the senior centers. “The definition of bingo in RCW 9.46.0205 requires that only bona fide members or employees of the licensed organization can manage or operate bingo.”

But Blair isn’t the only one facing harm from being generous. The centers have been fined and at least one was threatened with felony charges as well for selling advance tickets. The charities have repeatedly said they weren’t being exploited and residents benefited from the extra money.

“Rainbow Bingo is essentially conducting gambling by-proxy, through the senior centers. If we were to turn away and let the activity continue … we might have other businesses pop up with the same type of business model — illegally operating gambling through licensed organizations,” a spokesperson for the state gambling authority told the outlet.

“Congratulations, state, you went after drag queen bingo for two years, and you knocked it down,” Kingsbury-Comeau said. “Society has really dodged a bullet on this one.”