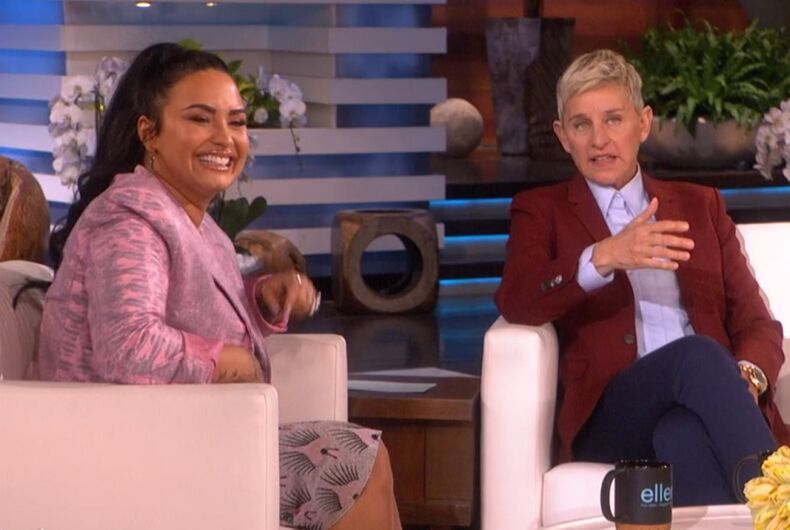 Singer Demi Lovato was on Ellen’s show today and she talked about how much she wants to make out with Rihanna.

Two years ago, the Grammy-nominated musician played “Who’d You Rather?” on Ellen’s show. Lovato liked a lot of the choices she was given, but ultimately she said she would rather Rihanna.

Today she was back on the Ellen Degeneres Show to promote her upcoming movie Eurovision, and Ellen of course asked if she has heard from Rihanna since she professed her crush on the singer on national television.

“I assume she’s called you,” Ellen said, but Lovato said that Rihanna hasn’t.

“I don’t take offense; she is Rihanna,” Lovato said, justifying why she hasn’t gotten a call from her.

“Rihanna, how dare you,” Ellen said to the camera.

“Look, I just wanna make out, OK?” Lovato said, making sure everyone understood that her request for Rihanna’s time wasn’t that big. She suggested making out in a video… so that it would be professional and not personal?

“Now she will call you,” Ellen said, laughing.

The original segment in 2018 was a big deal because it didn’t straight-wash Lovato’s sexuality. Ellen asked about both male and female celebrities, a way of playing “Who’d You Rather?” that’s appropriate for a bisexual guest.

Now Lovato and Ellen are on television joking about making out with another woman, at a time when straight media usually prefers to only discuss the opposite-sex relationships and crushes of bisexual stars.

Elizabeth Warren drops out of the presidential race