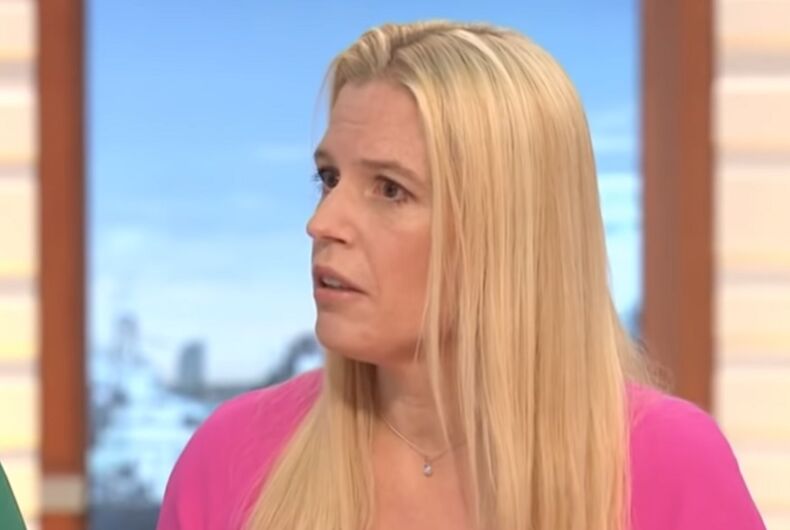 At Disney’s annual shareholder meeting, the company’s new CEO Bob Chapek stood up to an anti-LGBTQ activist who claimed Disney’s stock was falling due to its increase in LGBTQ representation.

RELATED: A British Christian wanted to protest LGBTQ people at Disney. She got banned from the US instead.

Farrow is extremely outspoken in regards to her anti-LGBTQ bias. She has called rainbow lanyards a “hostile political symbol” and has written that LGBTQ parenting “threatens to eliminate the concept of motherhood and rides roughshod over children’s needs.” She has also repeatedly made transphobic statement and even received an injunction to stop tweeting about a transgender lawyer.

“At a time when your stock is down by 20 percent,” she told Chapek, “is it perhaps time to reconsider what you can do to make Disney more family friendly… and also, what would you say to those 700,000 people who signed our petition saying, please let’s not have the gay prides in the Disneyland parks?”

She said there are many families that “no longer feel safe” to engage with Disney due to the prevalence of LGBTQ characters.

Chapek, however, wasn’t having it. He attributed the falling stock value to the coronavirus pandemic, and emphasized Disney’s commitment to inclusion.

“At Disney we strongly believe we should reflect in our creative content the diversity that we find in our fanbase and our audience,” he said. “I believe that will continue with an increased commitment as we move forward. We want to represent our audience. We believe we want to tell stories that our audience wants to hear that reflects their lives.”

“In terms of the stock price, there’s a lot of reasons why the stock price might be down 20 per cent that has nothing to do with the issue you raised – it might have more to do with coronavirus and the worldwide pandemic that we’re facing.”

His response was met with applause from the crowd.

These days, Disney has certainly been upping its game in regards to LGBTQ representation. In 2017, the Disney Channel’s first recurring LGBTQ storyline occurred on the show, Andi Mack. That same year, it featured same-sex couples on the cartoons Doc McStuffins and Star vs. The Forces of Evil.

There is also reportedly an out gay character in the upcoming movie, Jungle Cruise. And in the upcoming Disney and Pixar animated film Onward, Lena Waithe voices an out lesbian Cyclops.

Still, many believe Disney has not been moving fast enough when it comes to LGBTQ representation, or that its characters’ LGBTQ identities are too hidden, subtle, or token such as the company’s lack of embrace of Frozen’s Elsa as a queer character.

At the same time, its trajectory toward even subtle forms of inclusion has caused uproar among anti-LGBTQ conservatives. There have been petitions to stop the company from hosting Pride events and a call for a boycott from the conservative group One Million Moms.

Chapek, who has spent 27 years working for Disney, replaced CEO Bob Iger at the end of February. His response to Farrow suggests he is ready to commit to more representation.

Farrow has released a series of tweets in response to the attention their exchange has been getting by the media.

Today I did something pretty audacious, even by my standards. I took the concerns of every single member of @CitizenGO about inappropriate LGBT content in their children’s product direct to the brand new CEO of Disney, Bob Chapek, at their annual shareholder meeting.

Chelsea Manning has been released from prison following a suicide attempt