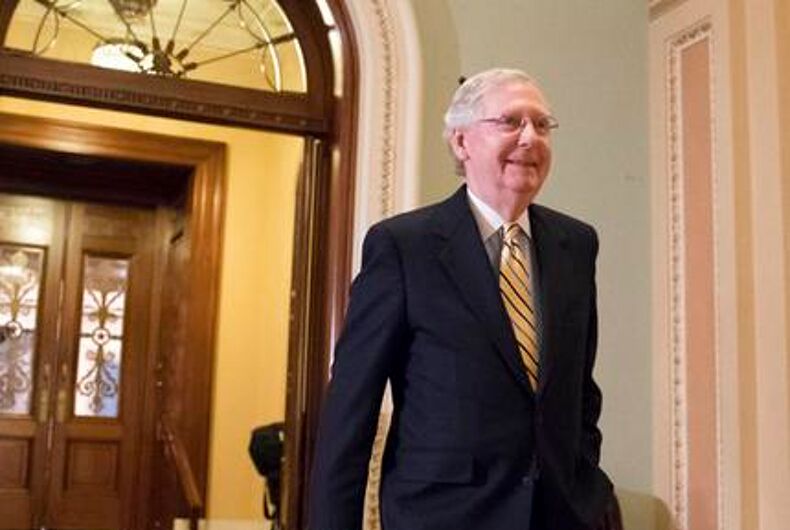 With the coronavirus crisis taking up so much attention, there isn’t as much focus being paid to the elections for the United States Senate that are happening concurrently with the election for President in November. While who wins the White House is incredibly important, the party that controls the Senate come January 2021 is just as critical to the future of this country.

Without the Senate, we will not be able to pass priority legislation for our community like the Equality Act or confirm federal judges who support our rights. The races listed below are not the only meaningful ones, but these are the candidates who not only support LGBTQ rights, but could make the difference between moving our rights forward or defending what we already have.

Incumbent Democratic Senator Doug Jones won his seat against the notoriously anti-gay Roy Moore in a special election in 2017. Jones has been a longtime advocate of marriage equality and LGBTQ rights in general. He also happens to have an openly gay son, Carson Jones. This race is expected to be an uphill climb for Democrats given Alabama’s strongly conservative leanings, but given that Donald Trump has now endorsed Tommy Tuberville versus Jeff Sessions, the Republican candidate who is seen as the stronger pick for the general election, Jones could pull off an upset and retain the seat with support from LGBTQ people.

Incumbent Republican Senator Martha McSally has been a strong opponent of LGBTQ rights throughout her time in the Senate as well as during her four years as a member of the House of Representatives. She supported a constitutional ban on same-sex marriage and voted to allow anti-LGBTQ discrimination in all federal agencies. She also supported President Trump’s decision to reverse Obama-era protections for transgender children in schools. Her Democratic opponent, on the other hand, former astronaut Mark Kelly, has been a staunch supporter of LGBTQ rights. This race could really decide control of the U.S. Senate and should be at the top of the priority list for Democrats.

Senator Cory Gardner is considered one of, if not the most, vulnerable Republican incumbent up for re-election. He is against including transgender people in employment non-discrimination laws and marriage equality, in favor of so-called “religious freedom” laws, and supports the Trump administration’s policy when it comes to banning transgender people in the military. The Democratic frontrunner, on the other hand, is strong LGBTQ ally John Hickenlooper, the popular former Governor who has been a longstanding advocate for our rights across the board. If Democrats are to have a chance of taking back the Senate, Colorado is almost certainly a must-win.

Although Democratic Senator Gary Peters isn’t usually included at the top of the list of vulnerable incumbents, he faces a potentially difficult race against Trump favorite John James, who lost by only 7 points to Michigan’s other Senator Debbie Stabenow in the blue wave year of 2018. Michigan went for Trump in 2016 and will likely be competitive this time as well. While James is against gay marriage and trans rights, Peters has been a dependable LGBTQ advocate not only in his time in the Senate but also during his tenure in the House. This seat isn’t likely to be in jeopardy, but we should at least keep an eye on it.

Along with Cory Gardner, Susan Collins is, perhaps, the most vulnerable Republican up for re-election. She has supported our rights ocassionally but has taken a rightward turn in the last several years, most notably voting for anti-LGBTQ Supreme Court nominee Brett Kavanaugh and voting to acquit Donald Trump during the impeachment trial despite the strong anti-Trump sentiment of her state. Democrat Sara Gideon, who as Speaker of the state House of Representatives has been a vocal proponent for the LGBTQ community, has a strong chance of finally defeating Collins.

Montana was not considered a competitive Senate race until a week or so ago when the incumbent Democratic Governor, Steve Bullock, announced that he had changed his mind and decided to run against the sitting Republican Senator Steve Daines. Daines has been a strident opponent of the LGBTQ community while Bullock, despite being in a solidly red state, has been an enthusiastic supporter dating back to his time as Attorney General of Montana. As Governor he has frequently spoken at pride rallies and in 2015 became the first Montana Governor to officiate a same-sex marriage.