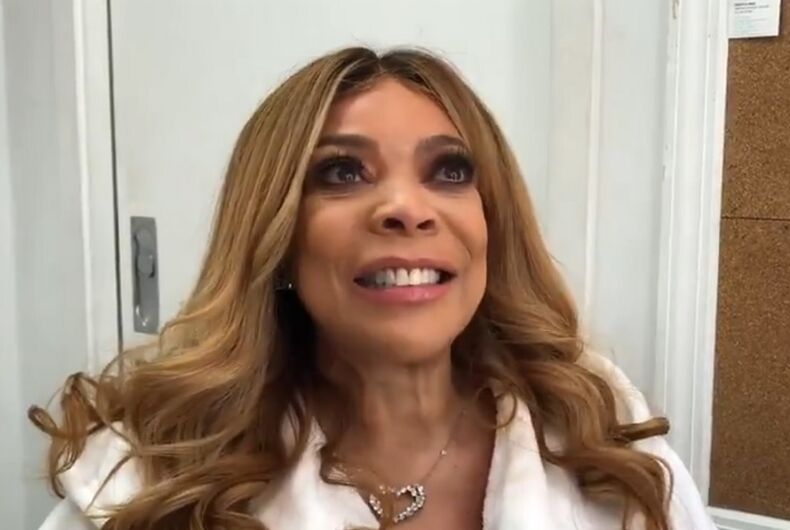 TV host Wendy Williams has apologized in a tearful video for anti-LGBTQ comments she made on her show yesterday.

The video comes after she was criticized online for saying that gay men shouldn’t wear skirts or heels or hang out with women on “Galentine’s Day” because they don’t menstruate.

“I don’t care if you’re gay. You don’t get a [period] every 28 days,” Williams said. “You can do a lot that we do, but I get offended by the idea that we go through something you will never go through.”

“And stop wearing our skirts and our heels,” she added. “Just saying, girls, what do we have for ourselves?”

“Looky here now, gay men, you’ll never be the women that we are,” Williams said. “No matter how gay.”

After getting criticized on social media for her comments, she has released an apology video on Twitter.

“I’ll start by saying I apologize. I did not mean to offend my LGBTQ+ community on yesterday’s show,” she said.

She implied that she didn’t realize until she watched a taping of the show how her comments sounded and that LGBTQ people have given her a platform since she was in first grade all the way up to her career in television.

“I didn’t mean to hurt anybody’s feelings,” she said. “If you’ve known me long enough, then you know….”

The distraught TV host then said: “Bon vivant, I don’t even know what it means but it sounds fabulous. In my mind, it means, ‘live and let live.’ Bon vivant. And I live and let live every day.”

A bon vivant a joyful person who loves life and especially good food.

Williams concluded by saying she “deeply apologizes” again and that she “will do better.”

A message from Wendy. pic.twitter.com/aEpMvubJVJ

While her comments on her show yesterday were a sharp and unexpected criticism of some gay men’s fashion choices, others pointed out that her rant called into question her beliefs about transgender women, especially since she appeared to say that menstruation was a requirement for wearing stereotypically female clothing.

1. Many cis women would be offended by having their womanhood reduced to a skirt and heels + menstruation.

2. I don't menstruate. I do wear a skirt and heels. Both are independent of me being a woman.

Also, her comments erased transgender gay men, some of whom menstruate.

This past November, Williams assured everyone in a long rant that she is not a lesbian because “I like men and I like the D.”

“It’s so complicated being a woman,” Williams said. “I just couldn’t imagine two of us in a relationship. I mean yesterday after the show I got the surprise of my life: at 55, I got a period.”