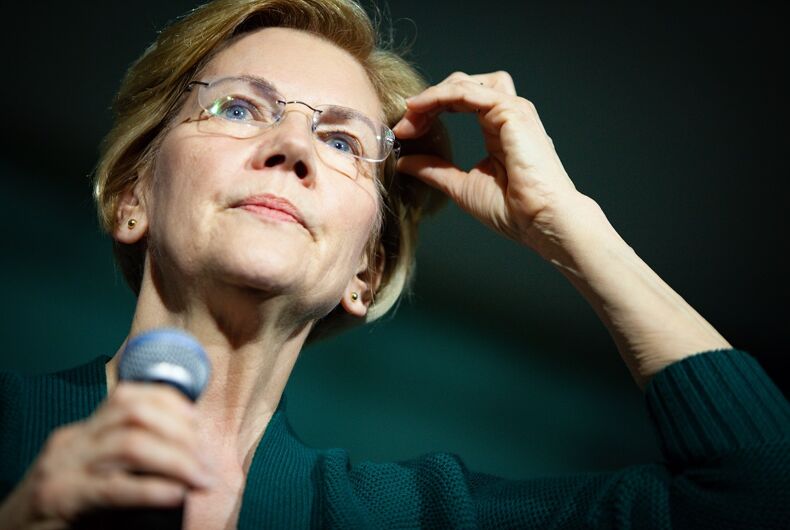 Angel Alicea, a California field organizer for presidential candidate Sen. Elizabeth Warren (D-MA), was filmed by the rightwing group Project Veritas expressing frustration with the senator’s forceful stance on transgender rights. In one part of the staffer’s rant, he tells the other person that “no one gives a f**k about a goddamn pronoun.”

The group is known for highly selective editing after they pose as progressives to gain the trust of the people they film. The group has set up Planned Parenthood and NPR staff and was busted in 2017 attempting to con the Washington Post into publishing incorrect information about then Senate candidate Roy Moore (R-AL).

Related: Democratic presidential candidates are starting to add preferred pronouns to their bios

That hasn’t stopped conservative media from touting the story in an attempt to sow dissent inside the Democratic Party.

“At the end of the day if we’re gonna prioritize pronouns over making sure people have a decent standard of living, that’s wrong,” Alicea said  in the video. “And when you come from where I come from, no one gives a f**k about a god damn pronoun. People want to know how to create a job.”

He also insinuated that he had been “ostracized” by other staffers because he is a straight man and was bullied into adding his pronouns to his personal Twitter account.

“The thing is – and like I’m here for the pronoun things – but I just feel like I shouldn’t have to say he/him/his, like shouldn’t it just be implied?” he continues. “When you put that over making sure people have decent jobs and healthcare, like, it’s a f**king no-brainer why we’re going to God damn lose an election.”

Project Veritas’s explosive videos have made mainstream news for their deceptive editing and the founder, James O’Keefe, has been sued for invasion of privacy after wrongfully accusing a man of being a “willing participant in an underage sex-trafficking scheme.” O’Keefe settled the suit outside of court.

The group has targeted several progressive organizations and politicians over the years.

A request for comment from the Warren campaign was not returned by publication.

"No One Gives a F**k About a G** D**n Pronoun…People Want to Know How to Create a Job" pic.twitter.com/DmM5PNjwSa

Editor’s note: This story has been updated to better reflect the nature of the lawsuit and its resolution.