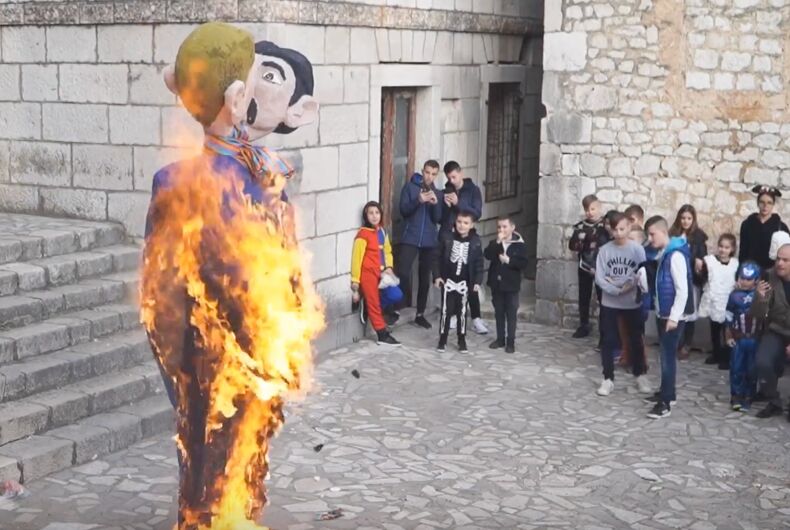 Residents burn an effigy of a gay couple in CroatiaPhoto: Screenshot

Residents of the small Croatian town of Imotski cheered and danced on Sunday while burning an effigy of a gay couple holding a child.

The violent display occurred during a town carnival, while a massive crowd looked on. In a video, many children can be seen watching as the adults around them applaud and play celebratory music.

Related: Bigots are losing it over a Croatian bank commercial

The doll in the couple’s arms, placed there to represent a child, was adorned with the face of Nenad Stazić, a left-wing, Social Democratic Party member and a member of the Croatian parliament.

Stazić had recently declared his belief that same-sex couples in Croatia should be allowed to foster children.

Before the burning, an announcer yelled: “My head is spinning from this culture of death… This year, let’s set this grotesque family with baby Nenad Stazić on fire!”

Afterward, festival organizer, Milivoj Djuk, told Croatian Newspaper  Slobodna Dalmacija, “We remain conservative, we stick to the tradition. Give your mother a baby, as the saying goes. We think it’s the right thing to do.”

“The symbolic burning of same-sex partners with a home-made child in Imotski is a sad, inhumane and totally unacceptable act in the guise of Carnival’s Baku festivities. The organizers who staged the shameful event, referring to the tradition, deserve the strongest condemnation of the public because hatred for others, intolerance and inhumanity are not and will not be a Croatian tradition.”

Milanovic went on to condemn the number of children watching:  “I ask for their public apology and reaction from the relevant institutions, especially as many children watched the event, thus witnessing the spread of hatred and inciting violence.”

While discrimination based on sexual orientation is illegal in Croatia, homosexuality is still met with wide hostility on a social level.

Same-sex marriage is also not legal in the country, though the 2014 Life-Partnership Act affords long term same-sex couples similar rights to married heterosexual couples. It does not, however, afford them the right to adopt children.