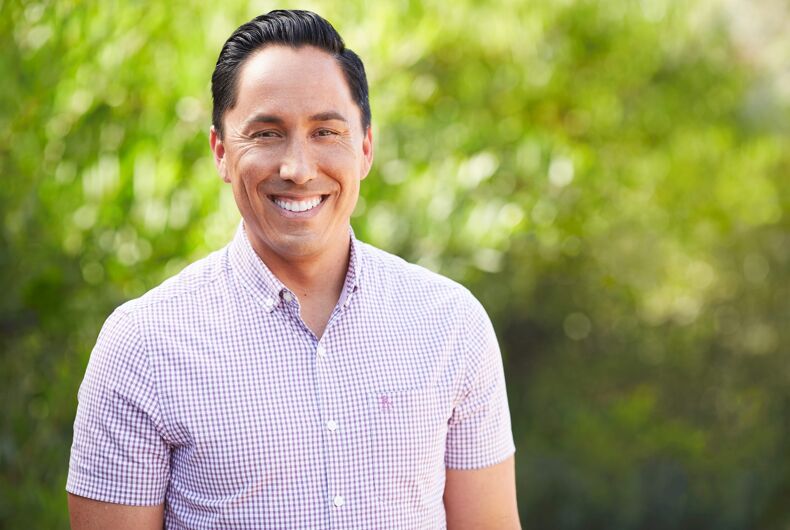 San Diego mayoral candidate Todd Gloria (D) believes being gay made him into the politician he is today.

A third generation San Diegan, the California State Assemblymember came out when he was still a teenager in the 1990s. In both high school and college, he experienced extensive bullying due to his sexuality.

And so, in hopes of making up for what society continued to tell him was a “deficit,” he fought harder to achieve his goals.

“That’s really where I found my voice as an activist,” he told LGBTQ Nation.

While attending college at the University of San Diego, Gloria successfully led the effort to get sexual orientation added to the campus nondiscrimination policy.

Through that experience, he said, he learned valuable political skills.

“I have a dear friend who likes to say that gay is a superpower,” Gloria said, “And that really resonates for me. I really found my way to being able to put myself out of my comfort zone, not just for me, but for other people. I hope to do that every day as mayor.”

If elected, Gloria will be the first LGBTQ person elected mayor of San Diego, as well the first person of color. He was appointed interim mayor with limited powers in 2013, a position he held until current Mayor Kevin Faulconer (R) was sworn in.

“This would be a significant barrier broken,” he said. “As a kid who grew up in this community looking for role models… I think this would send a really strong message to young people in our city today about what is possible.”

Gloria has emerged as a frontrunner in the race and has racked up an impressive number of endorsements, including the San Diego County Democratic Party, Sen. Dianne Feinstein (D-CA), Sen. Kamala Harris (D-CA), and the LGBTQ Victory Fund.

“It is Todd’s lived experience as an openly gay man and a person of color that will shape his inclusive and values-driven approach to tackling those big issues,” wrote Victory Fund President and CEO, Mayor Annise Parker, in a statement, “and as mayor he will ensure that no residents are left behind.”

Gloria has a long list of accomplishments when it comes to helping LGBTQ San Diegans. He served on the City Council for eight years representing the third district, which is home to the city’s LGBTQ neighborhood.

During that time, he spearheaded the passing of an Equal Benefits Ordinance that ensured contractors provided the same benefits to LGBTQ couples that they did to other couples.

He also worked on the “Getting to Zero” initiative, which established a ten-year goal to eradicate HIV and AIDS from San Diego.

“Representation matters,” he said. “If you’re in that room, you can bring up these issues that often aren’t discussed.”

Gloria is currently Vice Chair of the California Legislature’s largest ever LGBTQ caucus, where he has continued to fight for the LGBTQ community.

In 2019, for example, he worked with State Sen. Scott Wiener (D) to pass the first legislation in the country that allows pharmacies to sell the HIV prevention and treatment medications, PrEP and PEP over the counter.

Gloria’s focus on HIV advocacy, he said, comes in part from “knowing that many of the men who could have served and should have served didn’t because HIV and AIDS happened and took out a whole generation of leaders. I carry that responsibility on my shoulders.”

In 2013, Gloria was appointed interim mayor of San Diego after then Mayor Bob Filner (D) resigned over sexual harassment allegations.

During this time, he created San Diego’s Climate Action Plan that established a goal of cutting the city’s greenhouse gas emissions in half by 2035. A version of this plan was then enacted by current Mayor Faulconer.

Solving the homelessness crisis is a top priority, he said, as San Diego has the 5th largest homeless population in the country.

“Our strategy will be focused on permanent supportive housing instead of temporary shelters,” his website reads. “Our goal should be to end chronic homelessness… No more band-aids. No more temporary tents without a plan. No more criminalizing the existence of San Diego’s poorest and sickest residents.”

Gloria has received widespread support for his track record of success, but he also became the subject of a recent lawsuit regarding his admitted violation of the California Political Reform Act.

He has been accused of misfiling paperwork as a way to launder money into his mayoral campaign. Gloria insists it was a simple clerical error, one his campaign reported immediately after realizing the mistake.

San Diego resident Mat Wahlstrom sued Gloria over the matter and contended he shouldn’t be able to use certain funds raised for his mayoral race. The judge sided with Gloria.

he paid a $200 fine for the paperwork mistake, though he said Wahlstrom has recently filed another complaint against him.

“His allegations are baseless,” Gloria said. “Courts have not ruled in his favor, but he’s going to continue to push, as is his right in our democracy, but I hope folks can see it for what it is, which is a simple paperwork error and nothing more than that. Authorities involved in the situation have closed the case.”

The Advocate noted that Wahlstrom has also been a vocal critic on some neighborhood development projects that Gloria has supported in the city’s LGBTQ neighborhood.

Above all else, Gloria wants San Diego residents to know that he is deeply invested in improving San Diego for all residents. “I’ve spent my entire life serving my community, he said, “and I do it as someone who understands just how hard people work to live in this city, and that’s a perspective I’ve never lost.”

The son of a maid and a gardener, Gloria said he knows what it feels like to not be able to afford a car and struggle through the San Diego transportation system.

He also knows what it’s like to worry about making rent. In fact, he is still a renter today, the only renter, he said, in the entire California legislature.

“[San Diegans] should have someone in the mayor’s office who understands what they’re going through,” he said. “And have an advocate who is really going to make their lives better.”

Tré Melvin is still the King of Black YouTube