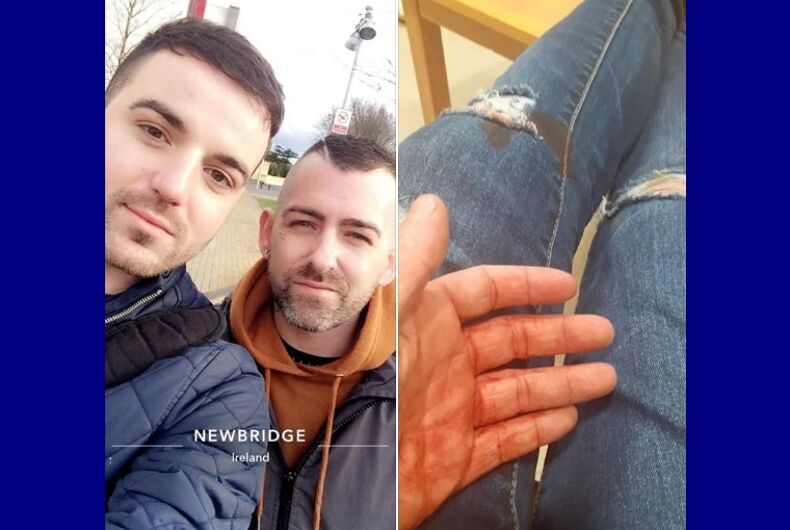 Police are looking for suspects in the brutal beating and stabbing of a gay couple at a train station.

Gearóid Laighléis posted on Facebook that he and his boyfriend Anthony on their way home from Newbridge, Ireland, this past Friday evening when they were attacked by a group of three men at the train station.

Related: A gay man was attacked by 4 teens with hammers in public. But will they be caught?

In the post, Laighléis said that he was knocked to the ground by one of the men and then kicked in the face during the attack.

Anthony was stabbed four times during the attack.

“They ran leaving him [to] bleed for [his] life,” Laighléis wrote on Facebook.

“Never in my life did I think I would be kneeling next to somebody I’m with holding there [sic] stab wounds to stop the bleeding to keep him alive,” he continued. “[I’d] never wish what I witnessed tonight on my worse enemy.”

He also said that one of the three men recorded the attack on video.

I'm not a person to put up Facebook status about my personal life. Myself and the person I'm seening decided to go…

Irish police confirmed the attack occurred and told Pink News that the victims were taken to the hospital with “non life threatening injuries.”

No arrests have been made and they are treating the attack as a possible hate crime.

“It is absolutely intolerable that this has happened and is happening in this society,” she continued.

We need increased Garda numbers and substantial sentences for perpetrators of these crimes. It is absolutely intolerable that this has happened and is happening in this society. This is on our doorstep and I cannot condemn it harshly enough.#NoToHateCrime #NoToIntolerance