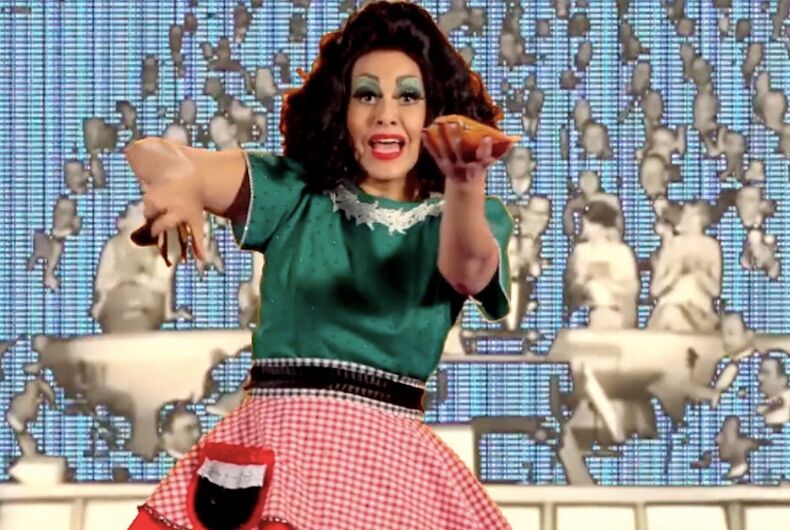 A performance art video by queer Latinx performer Xandra Ibarra has been labeled “obscene” by San Antonio’s City Attorney Andy Segovia and censored by the city’s Department of Arts and Culture from appearing in a public exhibit of Latinx art entitled, XicanX: New Visions. The show is scheduled to open at the Centro de Artes on June 28, 2020.

The exhibit’s curators, Suzy González and Michael Menchaca (who operate under the name as Dos Mestizx), are now petitioning Segovia, the city’s art commission, Mayor Ron Nirenberg, and local artists, activists, the LGBTQ community, and other citizens to get Ibarra’s video uncensored and included in the exhibit.

Related: Farmers are rioting over a “gay” painting on display at a museum

Ibarra’s video is entitled “Spictacle II: La Tortillera” and features her in Mexican housewife garb similar to what some hostesses and waitresses are required to wear at Mexican restaurants. The video is a burlesque performance in which Ibarra dances around a table, takes two tortillas out of her pocket, lays them on a table, and then removes her panties and places them on the tortillas.

Like Ibarra’s other work, her use of Mexican iconography, provocative nudity, and sexual expression seek to subvert and challenge stereotypical notions about Latinx bodies. Her work has appeared in galleries throughout Mexico and the United States, and she has also received several art grants and reviews in numerous magazines.

“There is no question as to whether Xandra Ibarra’s work contains artistic value,” Dos Mestizx writes. “Therefore, we oppose this censorship and see it as banishing queer, sexual, feminist, and Latinx creative expression, an act of discrimination and glaring homophobia.”

Dos Mestizx is also asking the City of San Antonio to reassess their definitions of “obscenity” stating, “[They] are in fact rooted in a tradition of silencing sexual expression.”

LGBTQ Nation has reached out to Dos Mestizx and Ibarra to ask how they might proceed if the city refuses to un-censor Ibarra’s work.