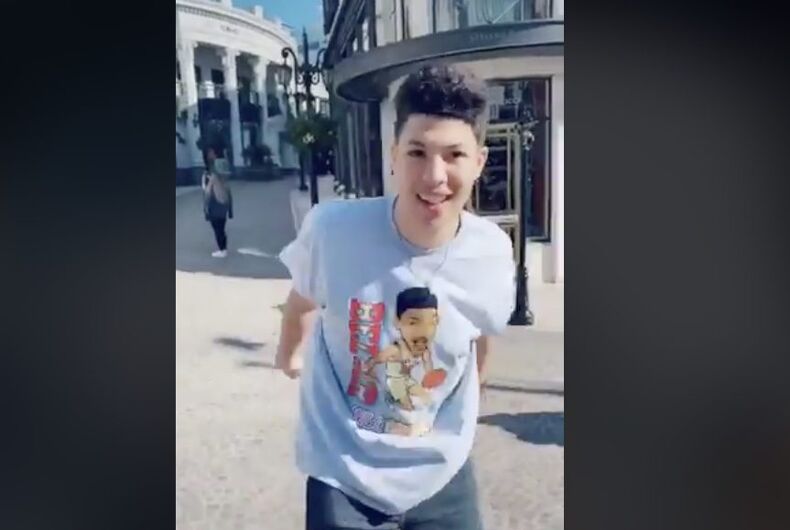 Jackson Mahomes, the younger brother of Super Bowl Champion and MVP Patrick Mahomes, has had a harder time celebrating his brother’s achievements as of late.

Throughout – and since – the Super Bowl LIV game in which Patrick led the Kansas City Chiefs to a 31-20 comeback victory, Jackson has been subjected to an increased amount of hate messages. It reached a point that he had to threaten to publicly expose those sending him “rude stuff” in hopes of deterring the harassers.

Jackson, a current college student, is a very popular content creator on the video social media app TikTok. Between there, Twitter, and Instagram, he has hundreds of thousands of followers, and he often sends out very positive messages encouraging his followers to “rise and shine” and make their dreams come true. He also considers Patrick’s girlfriend, Brittany Matthews, his “best friend.”

Make your dream a reality and be happy pic.twitter.com/A7c2hETj1h

Patrick was a highly-recruited prospect in both baseball and football, before attending Texas Tech University and becoming a superstar quarterback in the NFL. Jackson, five years his junior, attended the same high school, and he says that he grew closer to Patrick when he left for college because “he’s not as annoying anymore now that he’s grown up a little bit.”

Jackson was also a stand out athlete in basketball in his own right, and he would be taunted with “You’re not Patrick” at games. Their father, Pat, was a major league baseball pitcher.

As Patrick came closer to completing his championship season, Jackson received more attention and more hateful messages started to roll in. There are multiple videos, and even compilations, dedicated to social media users making fun of Jackson and his sexuality. Some clips even go as far as to portray Jackson and Patrick’s father seemingly disapproving of Jackson “Mahomo”, which has become popular for anti-LGBTQ people in his social media comments.

Media outlet Barstool Sports has championed the ridicule, with their founder Dave Portnoy writing an article on Jackson and Matthews with the grammatically-incorrect title “Is Patrick Mahomes Girlfriend and His Brother The Two Dumbest Humans On Earth?” (sic) in December. They’ve since tweeted about them several times. Jackson jokingly responded to one of their tweets after the Super Bowl.

Am I welcome to barstool HQ yet? Haha @KFCBarstool https://t.co/IsgZNLK3li

People have tweeted their anti-LGBTQ remarks publicly in light of Patrick’s success and Jackson’s rise in popularity, saying things such as “Jackson Mahomes somewhere doing sum gay on tiktok […] thats the only downside to all this” and “put Jackson mahomes gay a** in there […] I know he be holding onto balls.” One tweet even suggested he was going to “f**k so many gay strippers in Miami” following the Super Bowl.

“[A] lot of people DM me hurtful things then be like ‘you get 1000s of DM you will never see this’…Literally about to start blasting all these people,” a series of Jackson’s tweets read. He then suggests he would report the harassers to their employers, writing that “I think it would make great YouTube content.”

The threat appeared to have a positive effect because afterwards, Jackson tweeted on Wednesday in thanks to his those that sent “over 300 DM’s of positive things” to him.

Woke up this morning to over 300 DM’s of positive things, so just wanted to say thank u to everyone who sent me nice messages! Much appreciated!!:)

There hasn’t been any clear responses by anyone else in the Mahomes family yet – but Jackson and Patrick’s mom, Randi, has previously said “I am proud of the football, but the family part of it — I’m way more proud and that’s something that I definitely don’t get enough of,” in reference to her children.

While Jackson has been reported as “openly gay”, his sexuality in his own words couldn’t be confirmed at publication. One report even describes Jackson as “doing well for himself…with beautiful women at football games.”

Mary Washington has a sterling progressive resume. Now she wants to be Baltimore’s first out mayor.