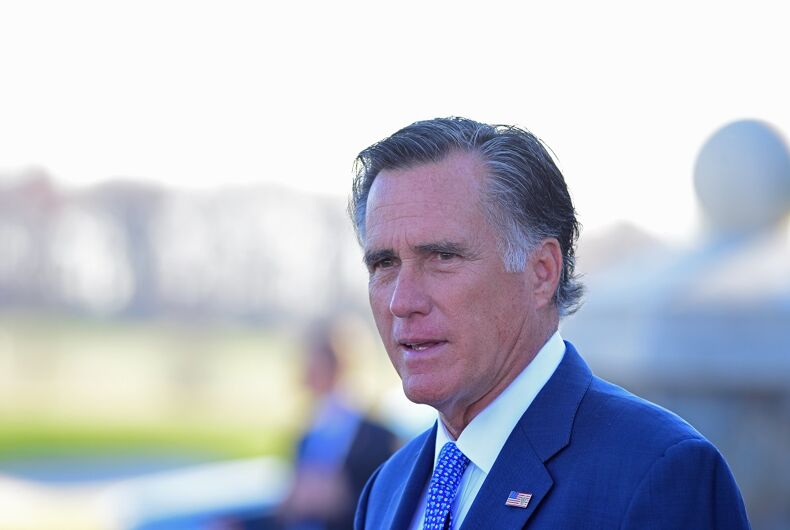 Sen. Mitt Romney (R-UT) has announced that he will vote to remove Donald Trump from office.

Romney, who was the 2012 Republican nominee for president, is expected to be the only member of his party to vote to remove Trump. That means that there will still be far fewer than the constitutionally-mandated 67 votes needed to remove Trump from office.

In a speech on the Senate floor earlier today, Romney asked, “Whether the president committed an act so extreme and egregious that it rises to the level of a ‘high crime and misdemeanor.”

Romney said that Trump’s disregard for the integrity of U.S. elections was “an appalling abuse of public trust” and that his actions were “a flagrant assault on our electoral rights, our national security interests, and our fundamental values.”

“Corrupting an election to keep oneself in office is perhaps the most abusive and destructive violation of one’s oath of office that I can imagine.”

Romney said that he has been considering his vote for some time, and that his office had received calls from Republican leadership telling him to “stand with the team.”

“I have voted with him 80% of the time,” he said. “But my promise before God to apply impartial justice required that I put my personal feelings and biases aside. Were I to ignore the evidence that has been presented, and disregard what I believe my oath and the Constitution demands of me for the sake of a partisan end, it would, I fear, expose my character to history’s rebuke and the censure of my own conscience.”

Romney said that he believes that he will be “vehemently denounced” by some Republicans and that even Trump himself will probably attack him.

“Does anyone seriously believe I would consent to these consequences other than from an inescapable conviction that my oath before God demanded it of me?” he asked.

Donald Trump Jr. is already calling for Romney to be expelled from the party.

Mitt Romney is forever bitter that he will never be POTUS. He was too weak to beat the Democrats then so he’s joining them now.

He’s now officially a member of the resistance & should be expelled from the @GOP.

W.Mitt Romney AKA Pierre Delecto – will always be remembered as the candidate who chocked when it mattered most. He begged for @realDonaldTrump to endorse him – now we know he will be a 1 term Senator.

Democrats, though, commended him. Rep. Adam Schiff (D-CA), who served as impeachment prosecutor for the Senate, lauded Romney’s “moral courage.”

Having proven Trump guilty, I asked if there was just one Republican Senator who would say “enough”

Who would stand up against this dangerously immoral president

Who would display moral courage

Who would do impartial justice as their oath required and convict

Trump himself has not yet weighed in on Romney’s speech, but he has said in the past that Romney “choked” in his 2012 presidential campaign against Barack Obama as a response to criticism.

Somebody please wake up Mitt Romney and tell him that my conversation with the Ukrainian President was a congenial and very appropriate one, and my statement on China pertained to corruption, not politics. If Mitt worked this hard on Obama, he could have won. Sadly, he choked!

Social media & body image: A deadly combination we need to talk about more