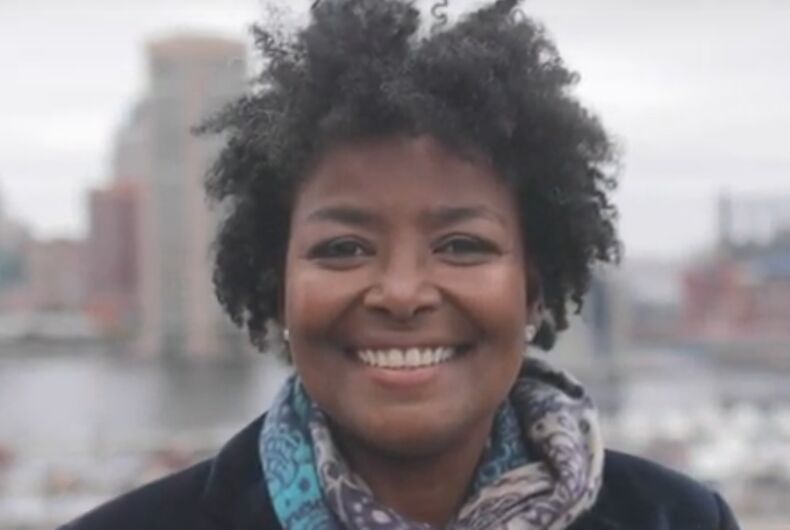 Now she is fighting to blaze yet another trail and become the first out mayor of Baltimore.

Washington, 57, believes it’s important for the city to have a mayor who knows what it’s like to feel like an outsider.

“So many people in our city feel they are outside of the system,” she told LGBTQ Nation, “that the system works against them, that they’re not taken for who they are as individuals, but [rather, they are] stigmatized for belonging to a group. I’ll be able to stand up and say, ‘I know that. I see you. And also, things are going to change.’”

While she believes her career accomplishments remain her most compelling qualifications for mayor, she does think her race and sexuality are important.

While serving as a member of the Maryland House of Delegates, Washington played a role in the passage of the state’s 2013 marriage equality bill. Voted in by referendum, the bill made Maryland, along with Maine and Washington, among the first states to legalize same-sex marriage through popular vote.

Washington, who has been endorsed by the LGBTQ Victory Fund, said she did not take her role in that fight lightly.

Her advocacy, she said, helped others see that marriage equality is not just an issue for white, wealthy gay men and that, as she explained, “the benefits conferred through marriage benefit working families, people of color, and women as well.”

She is running for mayor because she loves Baltimore, but she also believes the city has fallen victim to corruption and poor management.

“Year after year we under-invest in our public education system. We over-invest in policing without accountability and good outcomes. We under-invest in recreation centers. In almost every part of what makes cities work, what builds high quality life to make us safer and happier, we’ve gone the wrong way, and it starts at the top.”

Washington said as mayor she would focus on going back to the basics, like making sure the city is safe, that residents are able to get good educations, that they are employed, and that the government is responsive to their needs.

“We should make sure our streets are cleaned,” she said, “that people who violate our laws are arrested and made accountable, and that people who want to do business in our city get a fair shot. Because right now, it’s still very much about pay to play politics and who knows who.”

She hopes to accomplish all of this while also lowering property taxes.

The Democratic primary for Baltimore’s mayoral election will take place on April 28, 2020, during which Washington will face off against twenty-three other candidates.

She cites her record of integrity and “turning ideas into action” as what make her most qualified for the job.

During her time in the Maryland House of Delegates, she was the lead sponsor of a bill making it illegal to keep incarcerated pregnant women shackled while in labor and delivery and also while recovering from giving birth.

As a state senator, she was the lead sponsor of the Water Taxpayer Protection Act, which passed in April 2019 and prevents the city from placing liens on properties due to unpaid water bills. The bill was approved unanimously in both the Maryland Senate and House of Delegates.

A January 2020 poll of 319 likely Democratic voters in Baltimore showed former state Deputy Attorney General Thiru Vignarajah in the lead for the mayoral race, with just over 18% of voters choosing him. He was followed by City Council President Brandon M. Scott, then former mayor Sheila Dixon. About 8% of voters in the poll selected Washington.

The poll also revealed that crime is voters’ number one concern in the upcoming election. According to Fox Baltimore, there have been 1500 murders in the city in the last five years.

Washington wants voters to know that she understands Baltimore needs a mayor “who can stand up to it,” and while she may come off as warm and nice, she is also tough. “I won’t let anybody violate the public trust,” she said.

It’s just like her mother says, she added, “I may laugh and joke, but I don’t play.”