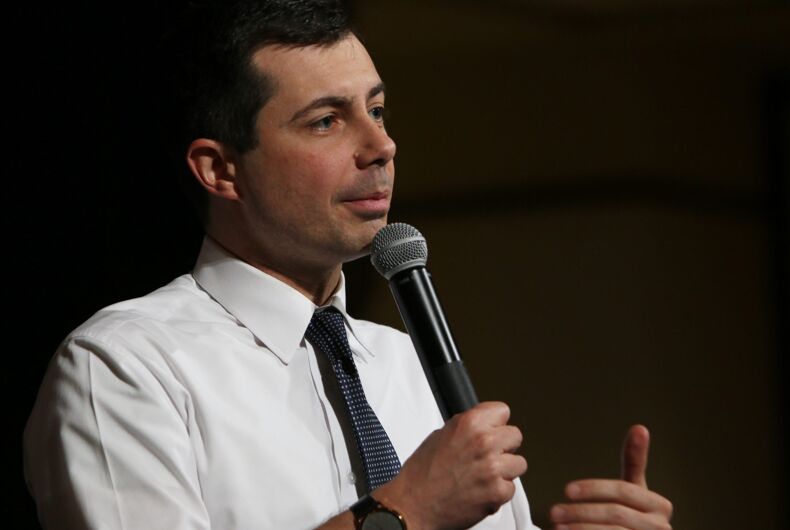 A major survey of voters in the state published by media outlets CNN and the Des Moines Register, conducted in conjunction with polling firm Selzer & Company and communications provider Mediacom, will not be released as scheduled.

Des Moines Register executive editor Carol Hunter published a note on Saturday night, announcing that “out of an abundance of caution,” the partnering organizations decided not to release the ‘final installation’ of the prestigious Iowa poll, which is considered one of the most reliable and accurate to occur throughout the entire election season.

Related: Here’s how the candidates shape up with mostly young and ‘very liberal’ LGBTQ voters

Reports indicate that the poll’s release was suspended due to complaints by the campaign of out candidate Pete Buttigieg. According to USA Today, Buttigieg’s staff “complained of irregularities in the polling methodology that left out his name among the panel of candidates,” meaning the voter would be more likely to name someone other than Buttigieg as their preferred candidate.

Without naming any specific people, Hunter wrote that “it appears a candidate’s name was omitted in at least one interview” with a potential voter. “While this appears to be isolated to one surveyor, that could not be confirmed with certainty,” she admitted.

“The Register has published the Iowa Poll for 76 years, and it is considered the gold standard in political polling…it is imperative whenever an Iowa Poll is released that there is full confidence that the data accurately reflects Iowans’ opinions,” Hunter wrote.

Buttigieg’s spokeswoman Lis Smith confirmed that the campaign received a complaint from the contacted voter, and they in turn let the poll administrators know. CNN claims that their internal investigation of the poll – “conducted by live operators from a call center where respondents are read candidates’ names from a list” – revealed that one operator had cut off Buttigieg’s name from the list by enlarging the font on his screen.

Smith praised CNN and the other poll administrators for making the decision.

We shared this with the organizations behind the poll, who conducted an internal investigation and determined not to release it. We applaud CNN and the Des Moines Register for their integrity. (2/2)

Several observers and voters in the poll have complained about the decision – #ReleaseThePoll began trending on Twitter due to it. Presidential candidate Andrew Yang speculates that the poll was pulled because he was going to do very well in it. “There are a lot of rumors flying around, and one of the rumors is that we did really really well in it,” he told a campaign crowd Saturday night.

Hunter said in a separate interview that the Register‘s polling of Iowa voters after they placed their votes on Monday will still go on as planned. “The ultimate poll is always when voters go and make their own decisions…our intent in polling is never to sway outcomes,” she said.

J. Ann Selzer, President of the Selzer & Company and executive supervising the poll, said in a statement that while they believe this to be “an isolated incident,” this decision had to be made “because of the stellar reputation of the poll, and the wish to always be thought of that way.”

Marsha P. Johnson is getting a state park in Brooklyn named after her